Q.1 What was the reason for signing a MoU with APIC? Please tell us what you think about this partnership.

The directors of the incorporated educational institution Tsuda University have close ties to APIC, and introduced the idea about forming a signed agreement together.


In fact, from before there was an official agreement of any sort, a student from our university interned at APIC. She was able to go to places that most ordinary students never do, and met many high-ranking people, sharing a seat at the same table and dining with them. I am very grateful for a partnership that allows students to gain such educational experiences.
Tsuda University has hosted University of the West Indies Principal Barriteau, and in October we held Floyd Takeuchi’s photo exhibit at our campus.
※1 See article （‘APIC has invited Principal of Cave Hill Campus of The University of West Indies）
※2 See article （‘Micronesian Photo Exhibition at Tsuda University: 『Pacific Light』） 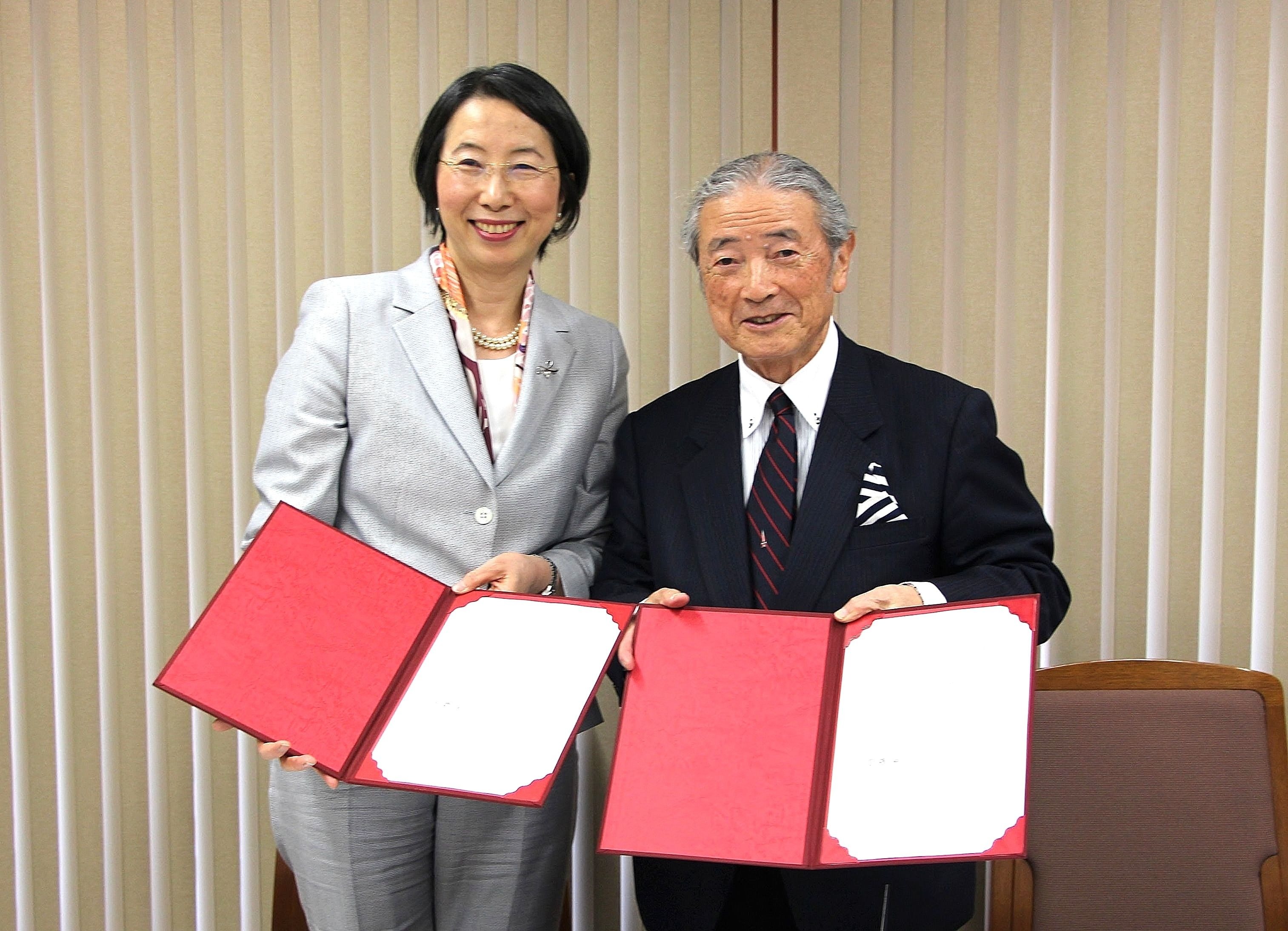 (Taken at the signature ceremony of the MoU in April 2017. Right: APIC President Peter Sato)

Q.2 I believe that this partnership has given Tsuda University students many opportunities to participate in internships and symposiums; what kind of hopes do you have for those students?

I believe interning at APIC gives the students many opportunities to experience ‘international cooperation’ in real life. Since the students are by the side supporting foreign visitors to Japan who are partaking in international cooperation, I hope students will cultivate the basic skills, Japanese and English language communication skills needed in the workplace after graduation. I also want students to take advantage of the symposiums, photo exhibits and other events that focus on the unique program of Pacific and Caribbean Islands, as this is an area that our university has not focused on before.

I believe that the word “global members of society” are people who aren’t thinking solely of their own profit, but who can think broadly in terms of society, who have a broad perspective and think deeply of others.


Our university was founded by Umeko Tsuda, a women who went boldly overseas to study. It was a time when travelling over the ocean was very difficult, but she came back from America and founded this university. I want our students to inherit those genes as well.

Q.4 We understand that you studied at the same American university as Hillary Clinton, Wellesley College. Why did you choose to study in America, and what made you go abroad in the first place?

I chose Wellesley College because even in the 21st century, it is still making enormous progress. Another reason was because Wellesley is part of the ‘7 Sisters’ (now only 5 Sisters) prestigious all-women higher educational institutions, which was also quite appealing.

Q.5 Lately, the number of students who study abroad is decreasing. What are your thoughts on this, and what do you think the benefits of studying abroad are?

I believe there are many reasons for the decline, but I hope that the number will start increasing. There are many benefits to studying abroad. I myself also studied overseas, and when you have that experience you are able to come in contact with and experience a diverse culture in daily life. Things that you thought had to be done a certain way are suddenly seen from a different perspective and you observe people doing them a different way. You then realize that nothing bad comes of doing it a different way, and your eyes start opening up to new and different ideas. I believe that my four years at Tsuda University are the years that built my foundation, but I believe that my first study abroad time spent in Kansas has become my backbone. I studied at Stanford University in California from 2003 to 2004, and from 2013 to 2014 I studied at Wellesley on the East Coast. I believe that my time spent in the Mid-West, West Coast, and East Coast gave me the experiences necessary for me to develop as an American studies researcher. I also definitely want students to study abroad when they’re young; when you’re young you are full of sensitivity and your thinking is more flexible and open to differences. It is very important to experience studying and living overseas to form and strengthen your backbone. Another thing, students are in a protected environment in Japan, but when you go overseas you have to figure a lot of things out for yourself, and study abroad experience helps develop your problem-solving ability. Rather than studying abroad for one semester, aim for one year, rather than one year, aim to receive your diploma overseas. This is the type of program I hope students will take part in.

The founder of Tsuda University, Tsuda Umeko, went to America when she was six years old, and in 1900 the predecessor to Tsuda University, Joshi Eigaku Juku (Girls’ English Academy) was established. I hold in high pride that the university was established by a female, which was rare, and has been in operation for 117 years, and that out of eleven presidents, ten have been women, showing the trust in women’s strength and power.


There is a long generation of women that Tsuda University has educated. Education has been passed down generation through generation, to where we are today. We are educating now, and we will continue to educate our women. In this aspect I believe women’s souls are part of this education. At Tsuda University, we are a university that has the strength to educate women.

The first female NHK human resources director, women playing main roles in the UN are examples of how our alumnae are opening new doors and creating their own paths. I hope that women like these will continue to graduate from Tsuda University and make an impact. I also want our alumnae to use the alumnae network to support each other, and for them to develop into women who will contribute to the peace, safety, and happiness of the world.

Q.7 What do you think about the new all-women’s university faculty of integrated policy’s new 4-term system? What are you looking forward to in this new system?

The faculty of integrated policy takes “problem-solving ability” as its catchphrase. From now and into the future, artificial intelligence and furthering globalization will greatly change society. An ageing and shrinking population is overcoming Japan like a tsunami, and current jobs will potentially be taken over by AI. Everyone who will be joining the job force in the late 21st century will have to carve out their own career path in this situation. In order to respond to these fierce changes, I want our women to learn the ageless power, academics, and liberal arts as a base in order to survive and develop their careers in the 21st century. I also want them to use the gap term and to learn and have a myriad of experiences.

Q.8 I read an article saying that Tsuda University is considering accepting transgender students. What is your opinion on the gender problem in Japan, and what is your policy as an all-women university?

We opened a discussion on the consideration of accepting transgender students. We are still at the consideration stage, and I cannot say what direction the talks will go. Our thinking is that we must treat individuals with gender dysphoria fairly and equally. Japan’s gender situation is one where women’s participation in society is lagging, there are not enough women in decision-making positions, and other challenges. This is why I want Tsuda University to be an institution of higher education that is empowering and provides an education that lets women acquire the ability to change society.

Q.9 I looked at Tsuda University’s website and saw your ‘TSUDA VISION 2030’ plan. What is the biggest factor you want to emphasize?

Our motto is to foster women who are in the center, women to acquire skills, and women who will take responsibility for change. In order to create a better society, we looked closely at how we can empower the women studying at an all-women’s university, and how we can draw out each student’s potential. We also put importance on developing an education that can keep up with the changing times, as it’s predicted that things in the 21st century will be changing at an exceptional speed.