News from Haiti Vol. 2: About the Republic of Haiti 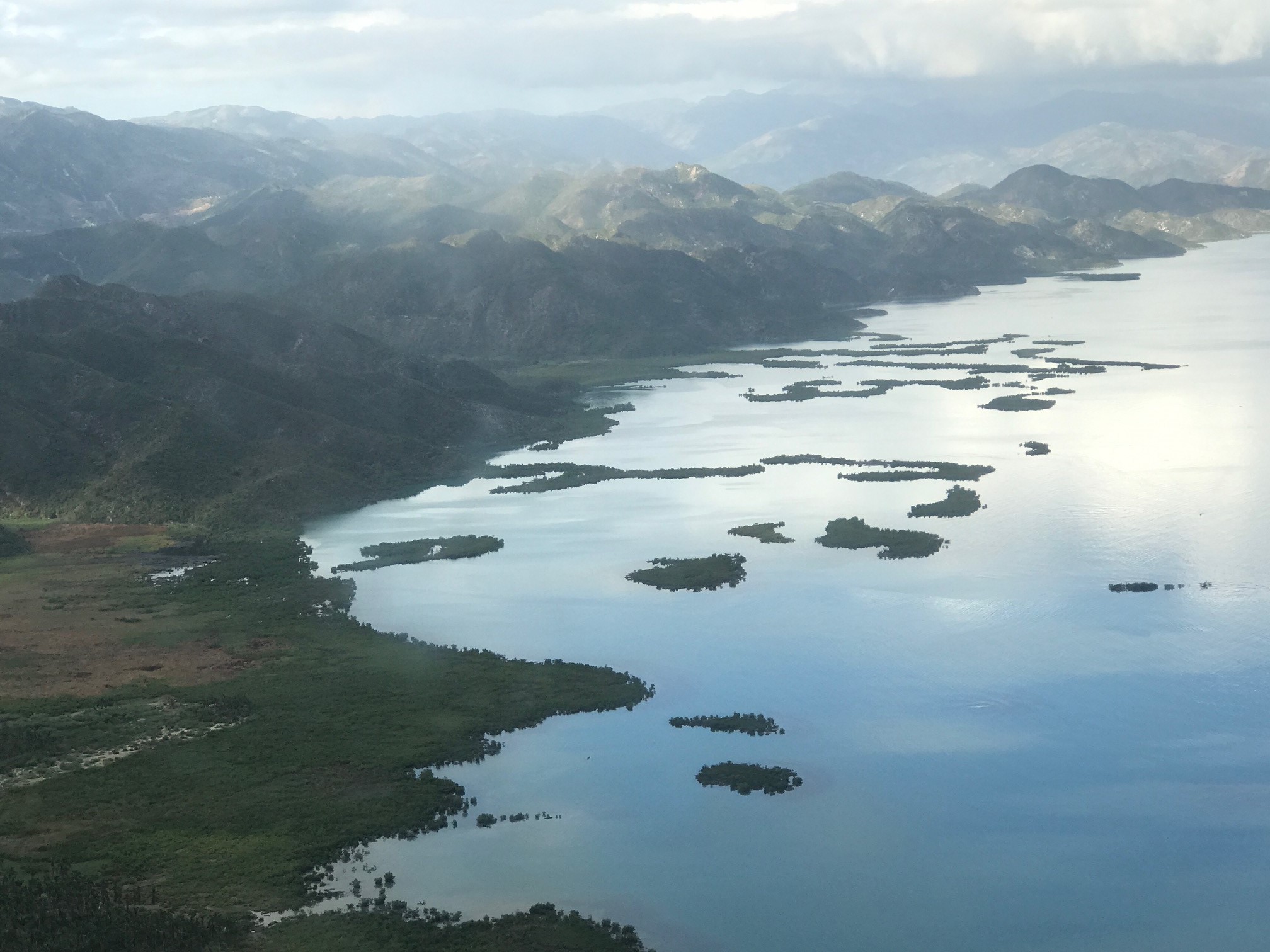 In the previous volume, I gave a condensed introduction of Haiti’s past and present. In this volume, in order to better understand Haiti I will go into more depth about current social conditions and the Haitian lifestyle.

◆Meaning Behind the Name “Haiti”
First off, the country name “Haiti” is pronounced “hi-chi” in Japanese, but in French, “Haïti” is pronounced “eye-ti” (there is no “h” sound in French). In Créole, it is spelled Ayiti and pronounced almost the same as in French, with a slight difference in tone and intonation. The name Haiti (Ayiti) comes from the Taino indigenous people, who originally named the island Ayiti meaning “land of high peaks”. Haiti re-named it after gaining independence from its French colonizers in 1804, and just like its name it is rich in rugged, mountainous landscapes.

◆The only French-speaking Country in the Region
In Haiti, Créole (French) or kreyòl (Creole), is a widely spoken language, but was not recognized as one of the official languages until much later in its history ( it became an official language by a revision to the Constitution in 1987). Creole is a mixture of the indigenous Taino languages, African languages, French, Spanish, and English combined to make a language unique to Haiti.

Until Créole joined the group of official languages, French was the only official language, and Haiti was the only French-speaking country within the Latin American region. In other words, compared to other Latin American countries where Spanish and English are major languages, French-speaking Haiti felt out of place at times, such as when it decided to join the mainly English-speaking organization CARICOM (Caribbean Community) in 2002. CARICOM is still considering whether to add French as one of the official languages; in 2013 under former president Michel Martelly, Haiti was able to attain a proposal from CARICOM stating French as one of the official languages; however, this has not been formally adopted.

In the first half of 2018, Haiti will have its second turn at being the host country (one turn is six months), and accordingly President Moïse has pressed for French to be added as an official language. The extra cost and extra manpower needed to add another official language is too strenuous for the community at the moment and there does not seem to be any prospect of French being added as an official language (when Haiti is the chair of CARICOM, simultaneous interpreters are used). Furthermore, Haiti also demanded that Creole and Dutch be added as official languages of CARICOM.
The ideal of having a multilingual, diverse community is seen in the EU, where this ideal is turned into a belief and is carried out, so naturally Haiti would press for a multilingual community. However, even if this ideal is carried out to a certain degree, there are many practical problems in the way of fully attaining a multilingual body. Also, since Haiti is close in distance to the United States, there is a large Haitian community that lives and travels between the U.S. and Haiti, the American-based Haitian population speaks English and is seen to be increasing. Haiti is also close to Central American nations, and thus many Haitians speak Spanish as well.

◆Climate and Nature
Taking a look at Haiti’s weather, it is a tropical maritime climate with temperatures at a peak in the daytime under the sun, and hot days and nights during July and August. During the other months and the rainy season, the evenings become cooler after the sun has set, and it can even feel cold in the early morning. There is not much of a temperature difference on the lowlands, but the temperatures decrease in higher elevated areas. If you go from Port-au-Prince and go upwards towards the neighboring upper-class city of Pétion-Ville, the elevation is already over 400 meters, and the temperature is two degrees lower. Going up further to the wealthy residential area of Morne-Calvaire, the temperature drops even further. Keep on going south towards Furcy and the Selle mountain range, and you will come across Mt. Kenscoff at the 1,500 meter level, a cooler area that is the home to many vacation homes. This area has also become the main fresh fruit and vegetable producer and supplier to the metropolitan area, with quality improving every year, along with rumors that coffee farms are the next challenge.

Additionally, the coastline is full of beautiful beaches; however, because the coastline is indented not all of the shores are picturesque white sand beaches that are typical of Caribbean islands. Looking out from the airplane window, the coastline seems to have no direct access, leaving the area largely untouched. It would seem to be a potential source for tourism if care is taken not to harm the environment. 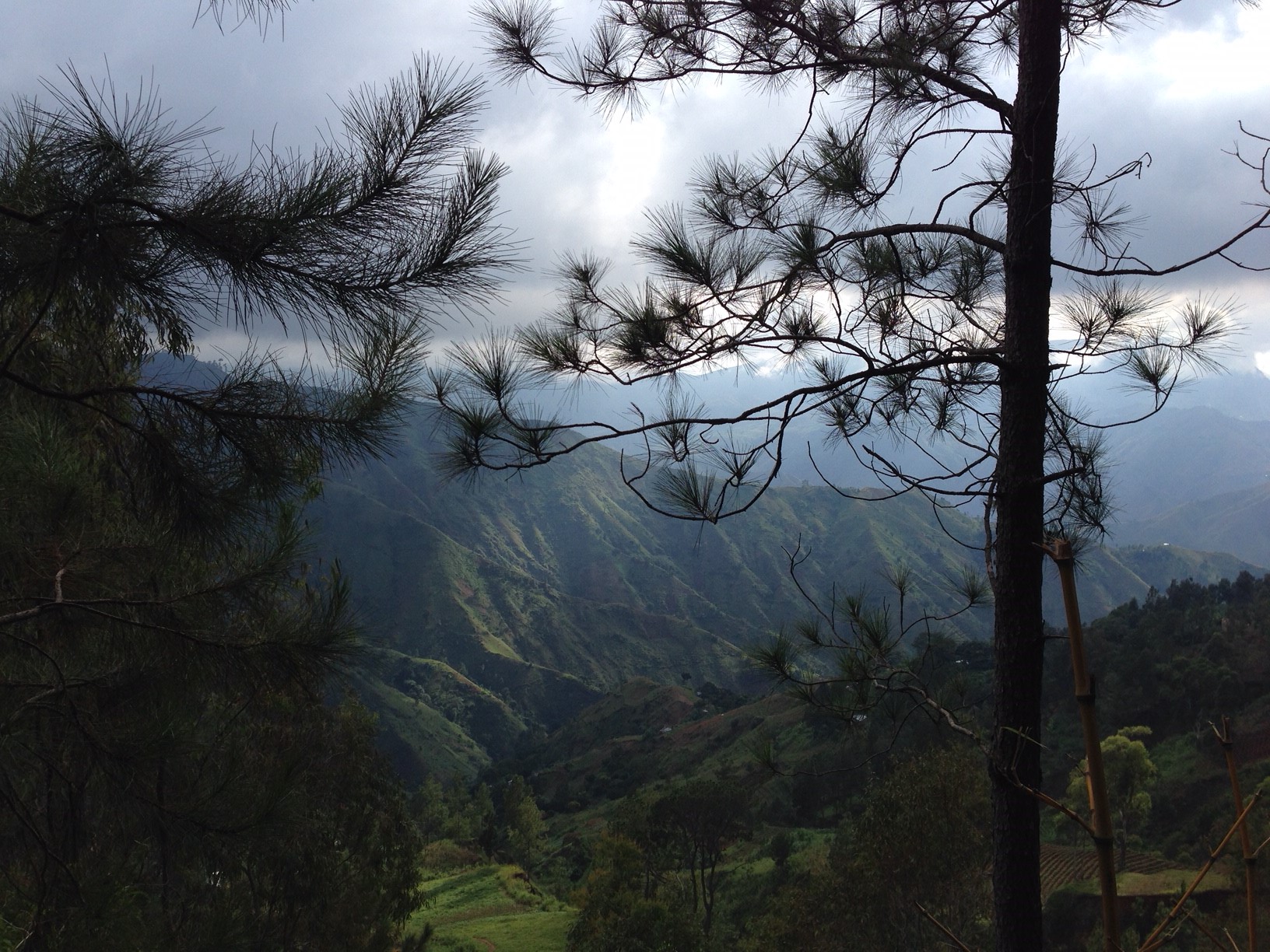 ◆Transportation in Haiti
Haiti is split into ten departments, with the capital Port-au-Prince at the center of the sideways horseshoe-shaped nation, and La Gonave bay near the north. There is a fairly well-paved road connecting the major cities of the north, central, and southern areas of Haiti, but as of yet no paid expressways connecting the cities. Furthermore, there are no trains or subways in either the rural areas or major cities. For those who do not have their own car, they may rely either on the “tap-tap", which is a Haitian shared taxi (or bus), or a motorcycle taxi to get around. Additionally, there are large coach buses that travel between the neighboring Dominican Republic and other major cities in Haiti. The tap-taps are pick-up trucks turned into taxis, where people get on and off at the back and sit on wooden benches made with plywood. They are brightly painted with Christian sayings, lyrics to songs, motivating words from soccer players and other scenes. There are also minibus versions that travel further distances, from the city center to rural areas. Motorcycle taxis usually hold around three to five people including the driver. Motorcycles are more expensive than tap-taps, but everyone from women to kids going to school uses them (I have even seen seven people on one bike!). The majority of these bikes are Chinese brands, which do pretty well on mountain roads with three, four people on the back at once considering the size and stability of the bikes. Privately owned motorcycles and bicycles do not seem to be popular in the cities, but are quite common in provincial cities, especially with students. 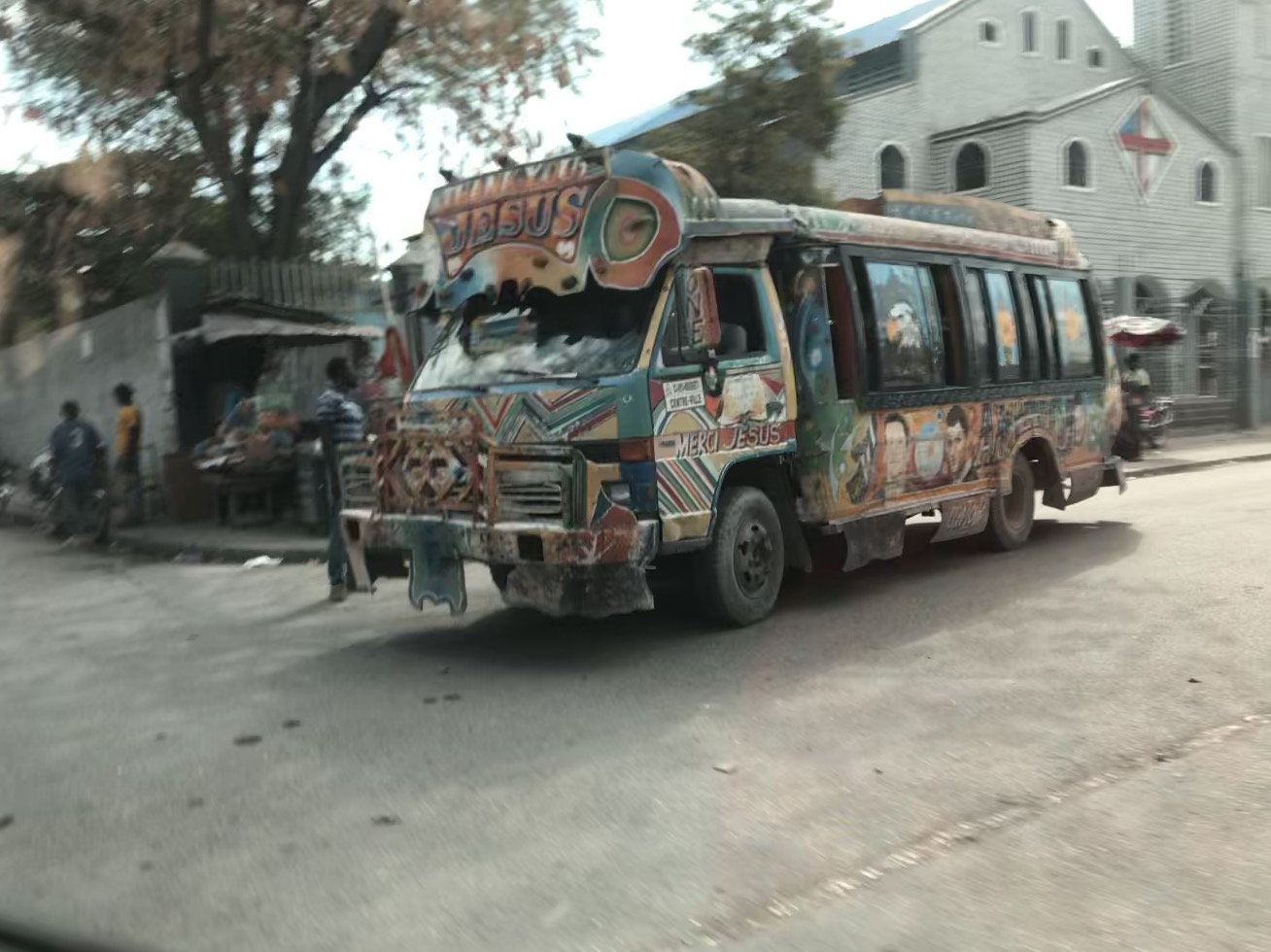 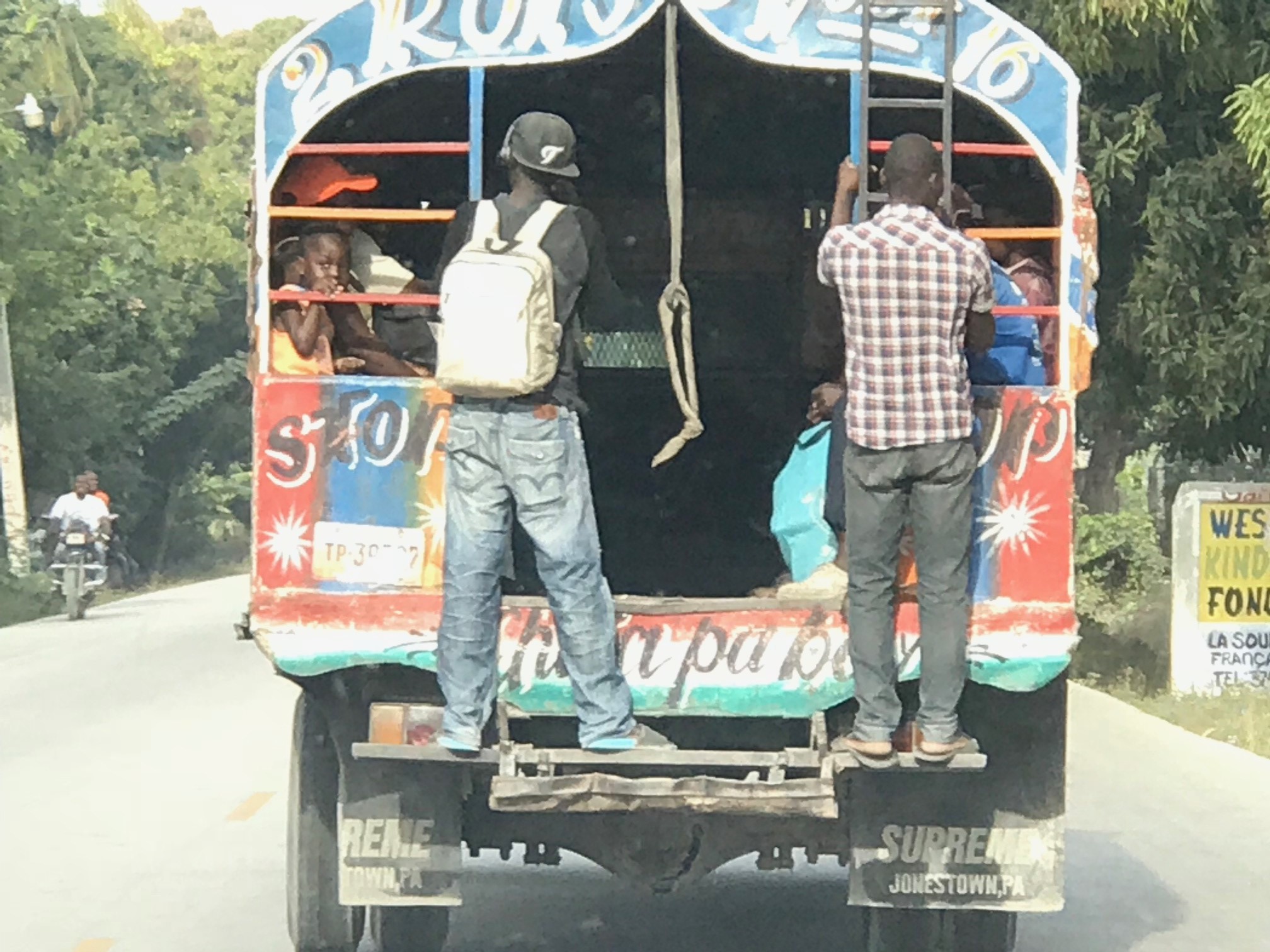 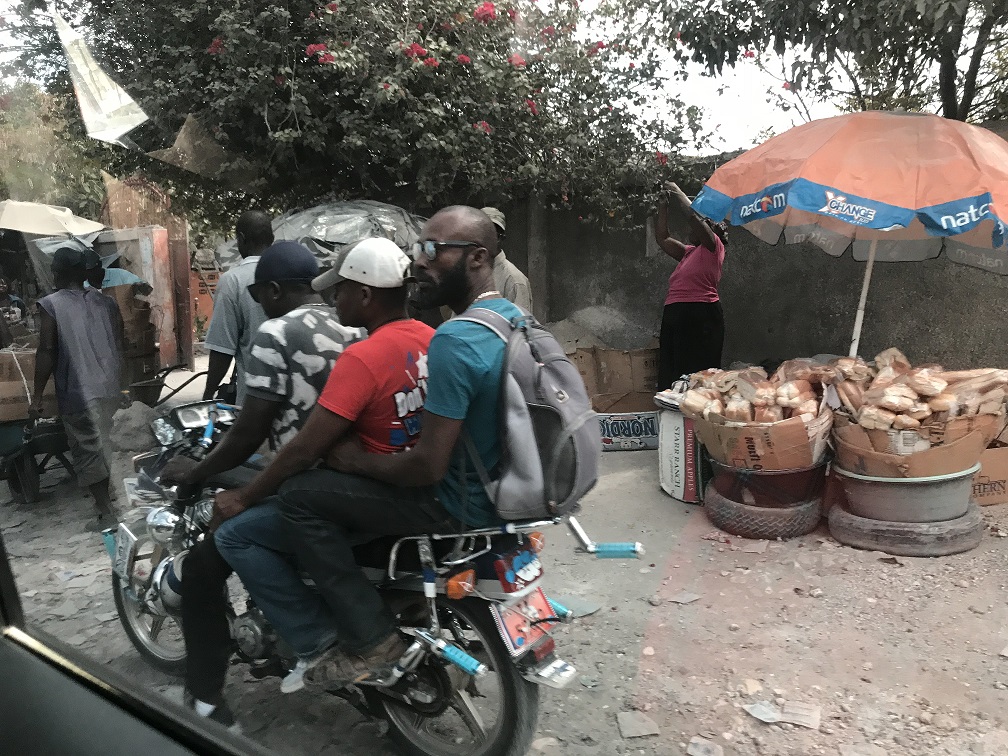 (Overload: 3 people on a motorbike) 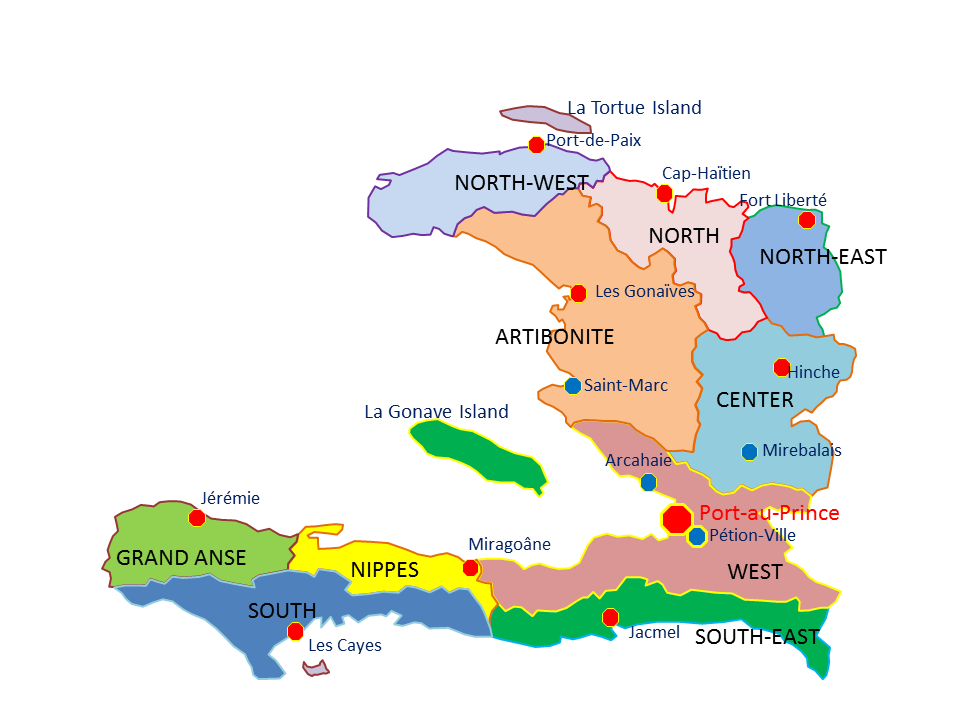 ◆General Architecture
Architecture and buildings depend greatly on one’s income bracket. For example, small huts in the slums are put together haphazardly with wooden poles and galvanized iron sheets, or cinder blocks stacked together with the same tin sheets as roofs. Buildings in the cities are built in a similar manner to those in southern Europe, with iron pillars and concrete flooring laid down first, then continuing on to the next floor with another layer of iron pillars. Cinder blocks are laid in after the pillars are set in place. When looking at construction sites, these buildings do not look like they are earthquake-resistant. Laying the tin sheet roofs is a perilous job, with square pieces of wood or blocks laid on top of the walls, and the roof is laid on top of a scaffold-like frame work. Many structures leave the space between roof and wall open so as to improve the flow of air through the building, and it is also common to see window frames with only lattice, but no glass in place; glass windows and metal frames are reserved for those with higher incomes. This type of construction may account for the fact that when a hurricane hits, wind goes inside through the open spaces and lifts the roof off the house, leaving walls intact but no roof. Although it may seem that these iron roofs are easy to replace, rebuilding is delayed when housing is flooded, and flooding provides a breeding ground for cholera, making the surrounding inhabitants vulnerable to disease and destruction. 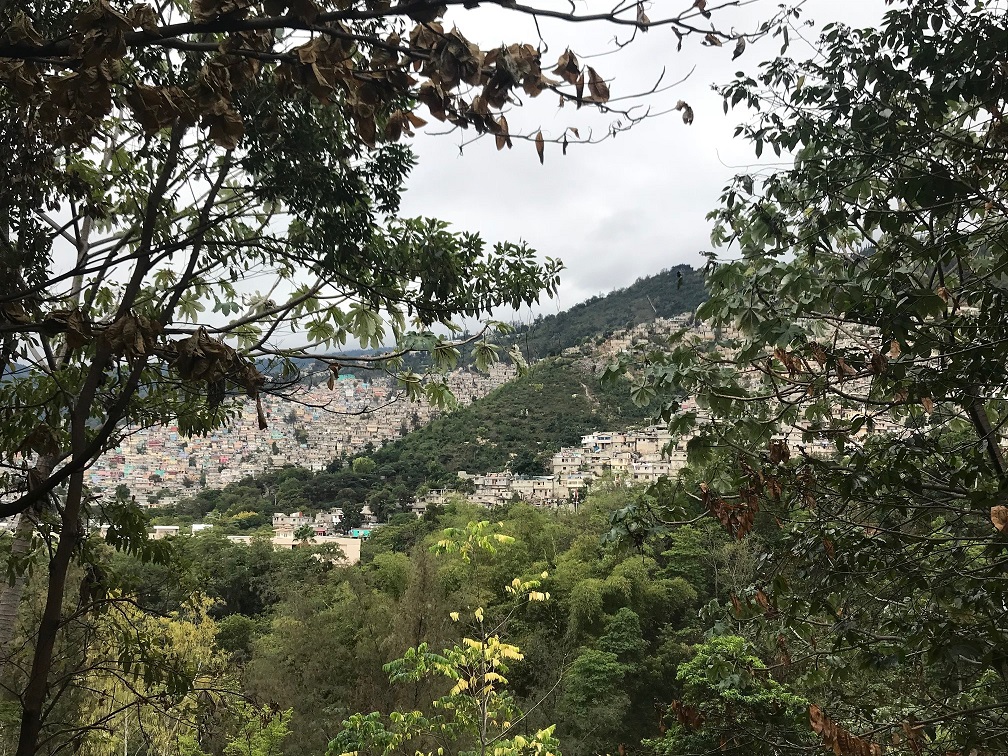 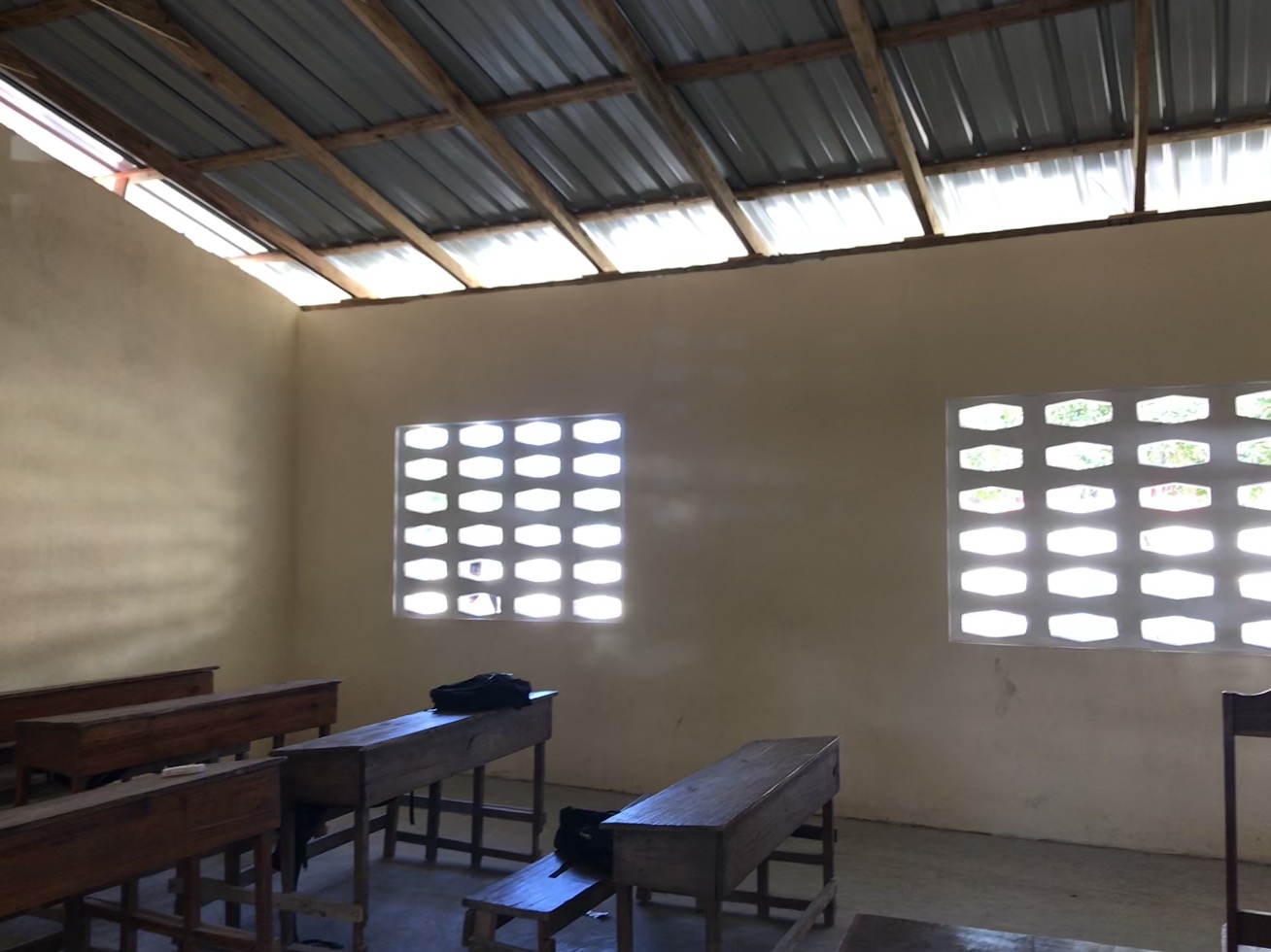 (Schoolhouse in the countryside with typical tin roofing) 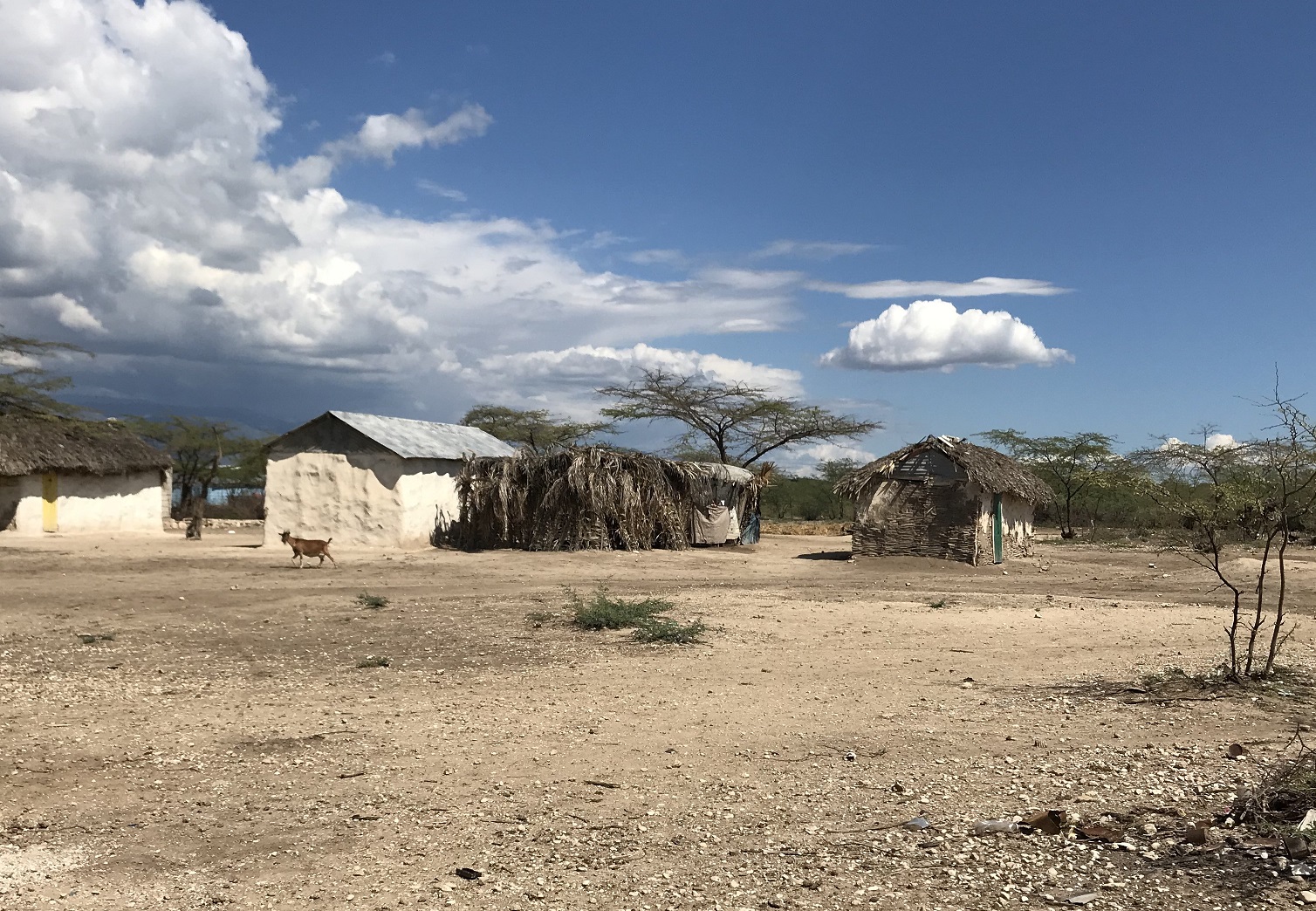 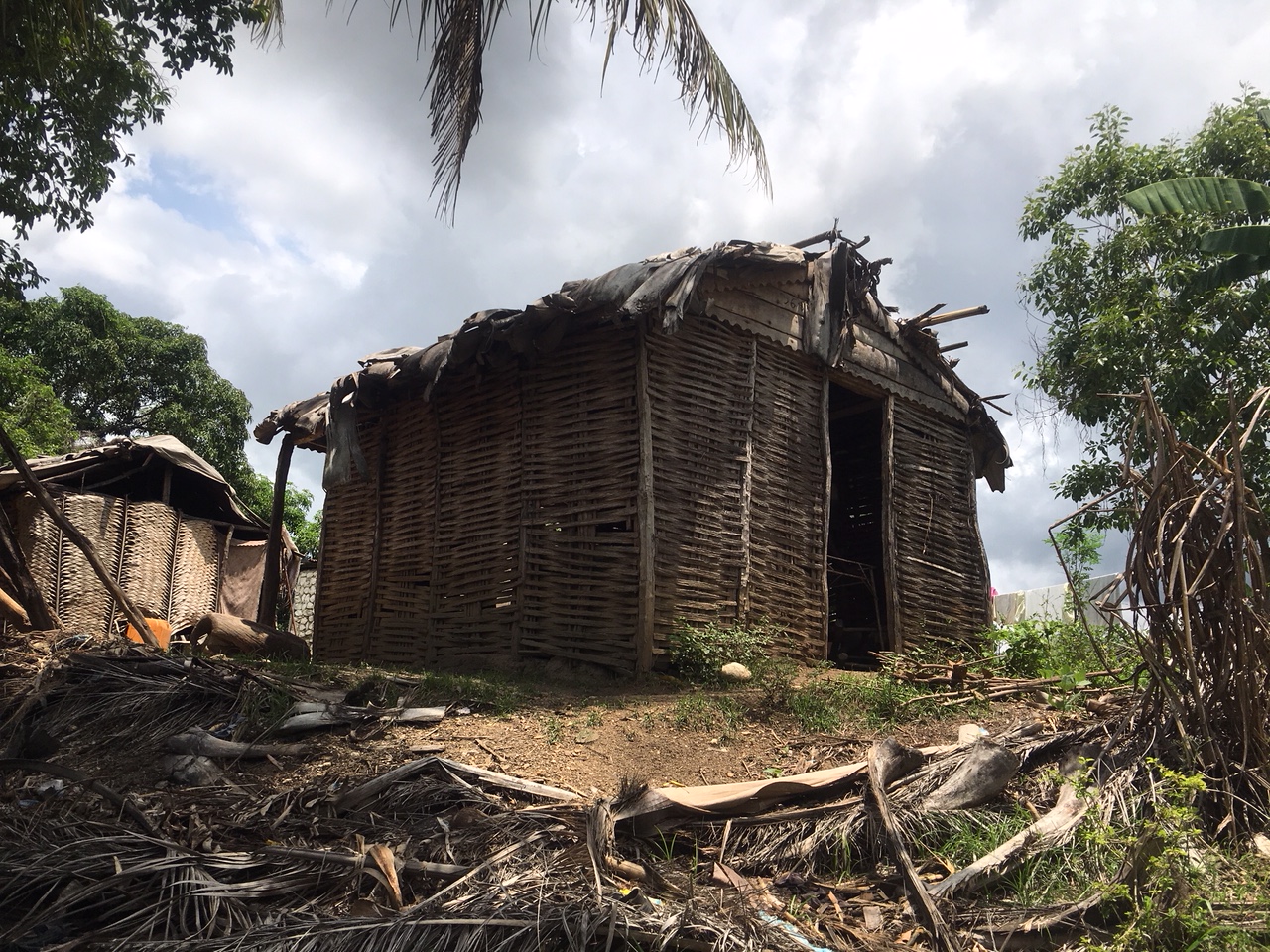 (A house in a farming village)


This concludes volume two on the topics of climate, transportation, general housing, and lifestyle. This volume is not enough to satisfy those who are interested in Haiti; however, next month I will focus on a different subject so please look forward to volume three.