An Introduction to Ama-chō of Oki Islands

Introduction:
The Association for the Promotion of International Cooperation (APIC) has taken a special interest in the small island of Nakanoshima (中之島), in western Japan. Nakanoshima is occupied by Ama-chō (海士町, Ama Town), and we will refer to it as such. This small island community is a world away from the bustling streets of Japan’s biggest cities. What makes Ama-chō stand out is that the people of this rural Japanese community have chosen to make it a model of self-sufficiency. By having the courage to conduct honest assessments of their declining economic and social situation, hard decisions were made and Ama-chō was able to achieve its goals.

APIC believes Ama-chō can serve as a development model for many communities in the Caribbean and Pacific. In October 2019, a Memorandum of Understanding (MoU) was signed between Ama-chō and APIC. In the MoU, APIC commits to present the “Ama-chō Model” as a viable example of Japanese best practices for sustainable planning and community leadership to appropriate groups and individuals from the Caribbean and Pacific. Since the MoU was established, Ama-chō has welcomed over 10 of APIC’s invitees from the Pacific Island region to tour Ama-chō. 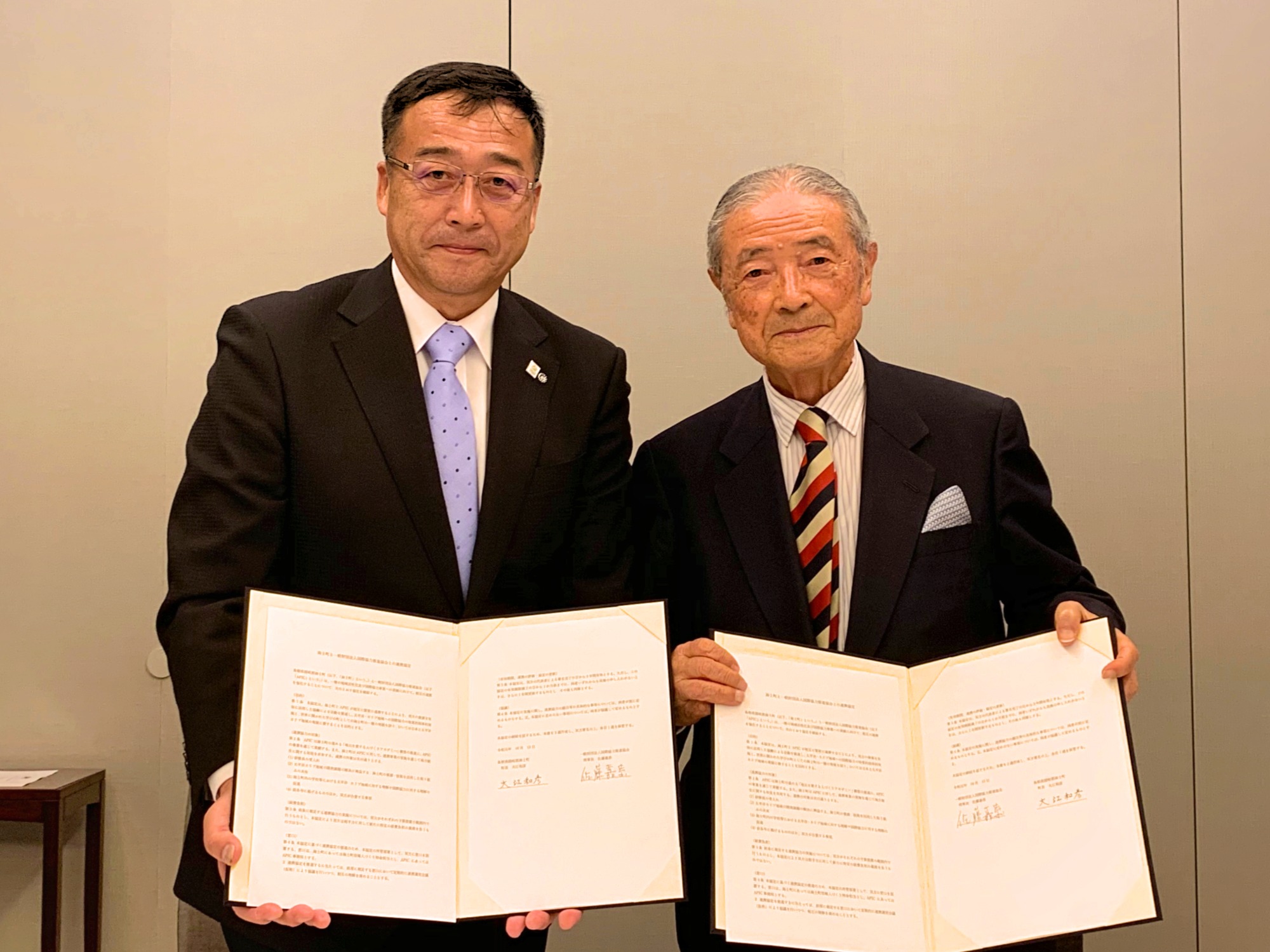 
Spirit of Ama-chō:
Ama-chō’s spirit is embodied in its motto, Naimono Wa Nai (ないものはない). This phrase has two seemingly contradictory meanings: “we have nothing” and “we have everything.” Naimono Wa Nai means that the people are content with that they have and do not need anything more.

The first definition reveals a positive outlook on the reality of their life. A true acceptance of “what is not here, is not there.” Secondly, Ama-chō has cultivated great values in their sustainability and sufficiency. These values include self-resilience and social capital. Ama-chō’s residents take pride in the resources they already have and believe in their ability to be self-sufficient, fueled by a willingness to change and challenge themselves to create happiness.

This community value, which has its foundation in the hardy, hardworking ethos of generations of Oki islanders, will be familiar to many islanders from the Caribbean and Pacific. An actual visit to Ama-chō provides a firsthand look at what can be accomplished when a small, rural community decides it must be responsible for its own destiny. 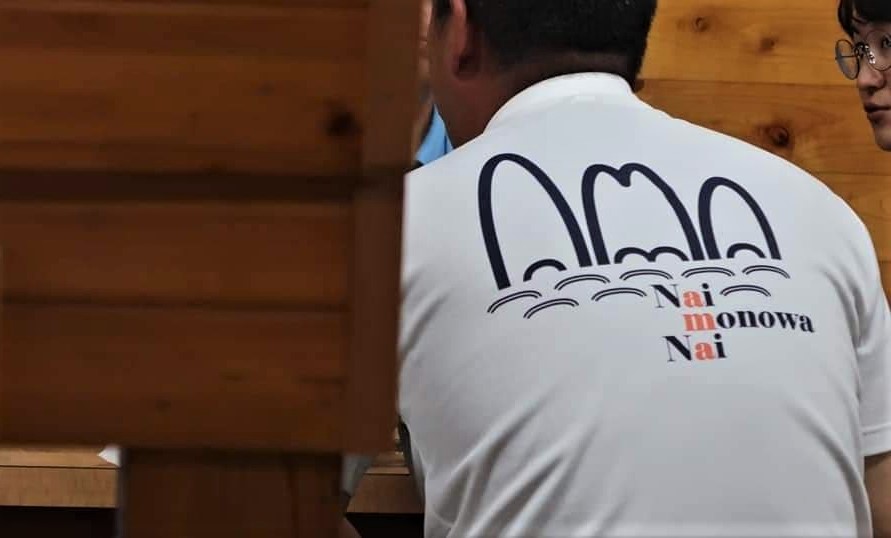 
Issue – Population Decline:
Like many rural areas in Japan, Ama-chō’s population has been in decline over many decades. But the townspeople have attacked this issue in several ways.

Today, the population is about 2,300. In 1950, it was 7,000. This decline is the result of many factors. For example, a shortage of attractive employment opportunities, an aging population, and a declining birthrate are primary reasons.

In 2002, the then newly elected Ama-chō Mayor, Michio Yamauchi, implemented a management policy of independence, challenge, and interaction. This focus helped the town consider different strategies to improve areas to strengthen the area’s economic base and attractiveness as a place to live. Mayor Yamauchi implemented two strategies that showed purposeful municipal leadership. They were called the Defensive and Offensive approaches. Municipal Leaders also focused on human development to increase the population.

Resolution Approaches – Defensive, Offensive and Human Development:
The Defensive and Offensive strategy is a two-way system that allowed Ama-chō to achieve its goal of developing a more vibrant community. The Defensive approach focused on the implementation of administrative and financial reforms. It also addressed the issues of an aging population and a declining birthrate.

Municipal leaders made difficult decisions based on the economic and social realities of Ama-chō at that time. The municipal leadership and all public servants accepted pay cuts in order to reallocate funds to better support the society. It all started when Mayor Yamauchi announced aggressive changes to prove he was serious about improvement. He took the first move, volunteering to have his pay reduced by 50%, and was soon followed by other municipal leaders and public servants at different percentages. Other changes such as early retirement and the abolishment of the “seniority system” for civil servants were put into place. The result amounted to about 200 million yen (approximately US$1,820,800.00) that was used to fund other priorities.

Rather than just cut public spending, the municipal leadership reallocated the “savings” into various subsidies for residents to encourage people to either stay or move to Ama-chō, and to support growing families. Among the subsidies were various “child-raising support” payments to encourage population growth and the birth of more children. These benefits included monetary gifts for marriage and childbirth, medical care for babies, aid for transport expenses and many others.

The Offensive approach focused on industrial development initiatives. Ama-chō took measures to “brand” the entire island to make it more attractive to investors. Government leaders placed a priority on attracting investment that would expand employment opportunities. Indeed, the focus has been on encouraging job-intensive investment. Examples include manufacturing packaged “Sazae” curry featuring a shellfish Ama-chō is famous for, Oki beef, Ama salt and so on. These new jobs also drew people to Ama-chō from other parts of Japan. The newcomers now comprise 10 percent of the population and helped to the slow the area’s population decline. Ama-chō also put heavy emphasis on growth driven by human development. One example of this is the efforts made to place people from other parts of Japan into municipal administrative positions. This encouraged cultural diversity.

The plan also emphasized strengthening educational institutions to revitalize the region. Ama-chō’s Oki Dozen High School is the only senior high school in the region. From 1997 to 2008, the school lost more than half of its students. To reverse the trend, Oki Dozen opened its doors to students from all over Japan. Since 2008, when initiatives to improve educational institutions began, the population of the high school has risen exponentially. 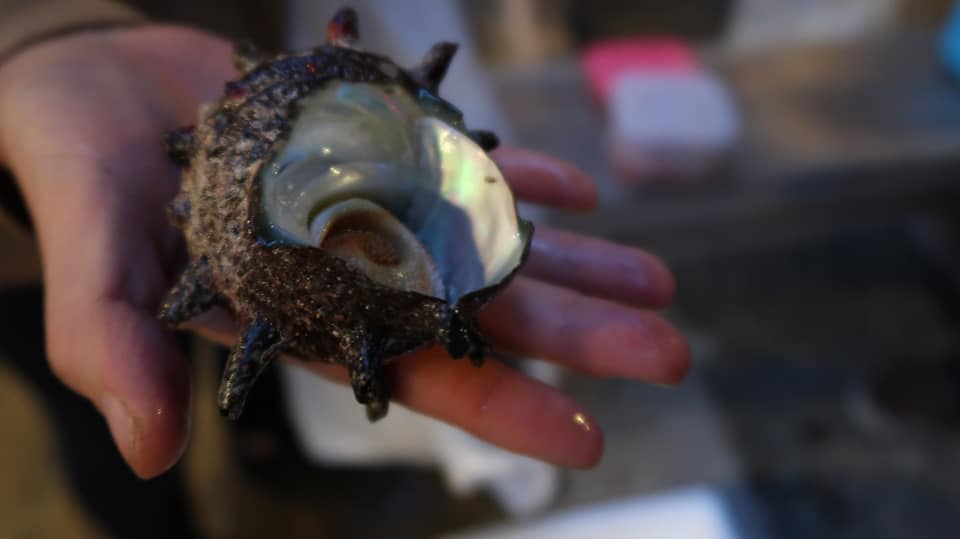 
Brief History:
To gain a deeper understanding of the area, here is more background information. Ama-chō is part of the Oki Islands archipelago, located off the northwest coast of the main Japanese island of Honshu. The islands were connected to Honshu during prehistoric times but became separated due to geological developments. The Oki Islands were historically known as the Islands of Exile for hundreds of years, as political exiles and criminals were sent to these remote islands to carry out their sentences. Indeed, Ama-chō is best known as the resting place of the Emperor Go-Toba, who was buried in 1221. Although he was sent into exile, the Emperor survived comfortably thanks to the island’s rich farmlands. He lived there for 19 years.

During the Edo period, the islands had an active shipping port, which served many parts of Japan. In 1868, a short-lived rebellion for autonomy led by the local population of Oki lasted for about 80 days until it was stopped by military force. About 10 years later, in 1876, Ama-chō was integrated into Shimane Prefecture, having previously been a part of Oki Province. 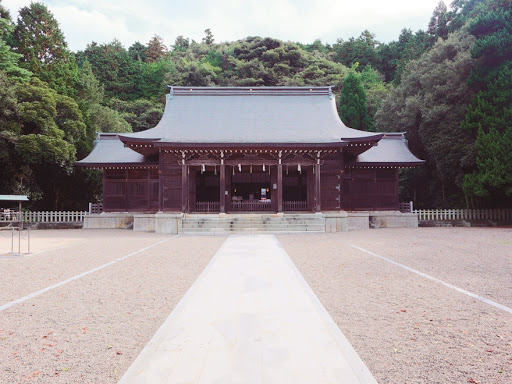 Oki Shrine located in Ama-chō. Built in honor of the late Emperor Go-Toba.


Geography/Statistics:
The Oki Islands archipelago is about 25 miles (40 km) off the coast of Shimane Prefecture and Honshu. The archipelago is located about 400 miles (657 km) west of Tokyo, in the Sea of Japan. Four of the group’s 16 islands are permanently inhabited: Dōgo (島後), Nishinoshima (西ノ島), Chiburijima (知夫里島) and of course, Nakanoshima (中之島).

Ama-chō is known for excellent fishing and farming. A warm current flowing south to north makes the surrounding seas rich in marine life. At the same time, the island has abundant fresh water sources, which make the island good for farming. The Oki Islands have a total land area of about 136 square miles (350 square kilometers) with a population of about 22,000. Ama-chō alone has a population of 2,300. 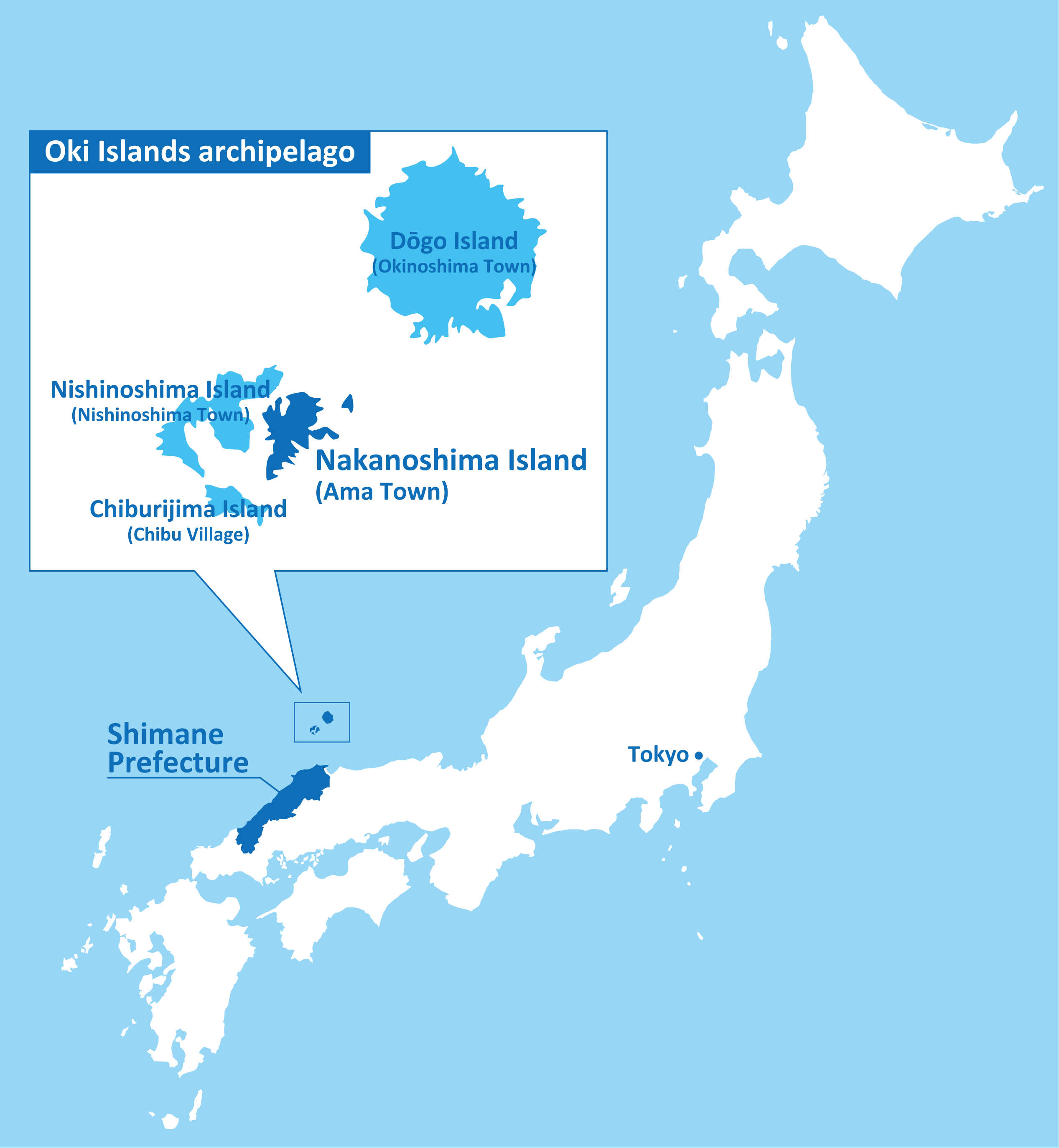 
Access:
at Haneda Airport. There is a one-and-a-half-hour flight to Yonago Airport in Tottori Prefecture. From there, it is a 10-minute bus ride to either Sakaiminato or Shichirui ports. This will be your first step to “unplugging” from the Tokyo experience. Between Yonago Airport and the seaports, there is a less than Tokyo-convenient wait time of about six hours. For those waiting for the next leg of transportation at either Sakaiminato or Shichirui ports, there are few shops and restaurants that visitors can explore. Also, free WiFi signals are spotty at best. From either port, there are two forms of transportation to Ama-chō’s Hishiura Port. There is the high-speed Rainbow Jetfoil, which takes a little more than one hour, or a regular ferry which takes around two-and-a-half hours. Depending on the choice of sea transportation, the journey may include various stops. During winter, weather conditions may affect ferry services to the Oki Islands.

Attractions:
Below is a list of various institutions, facilities, attractions, and cultural sites in Ama-chō. For more information about the various things to see and do in Ama-chō, please click here. 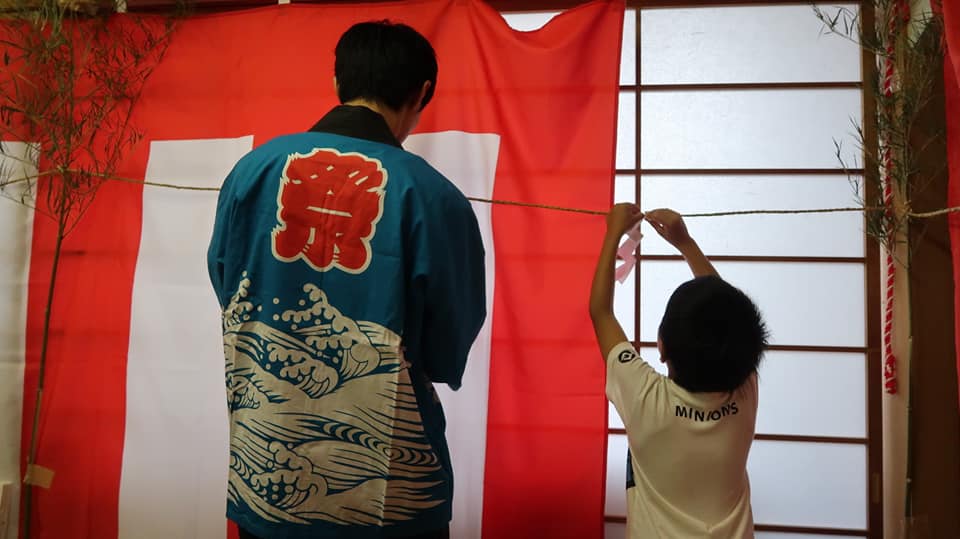 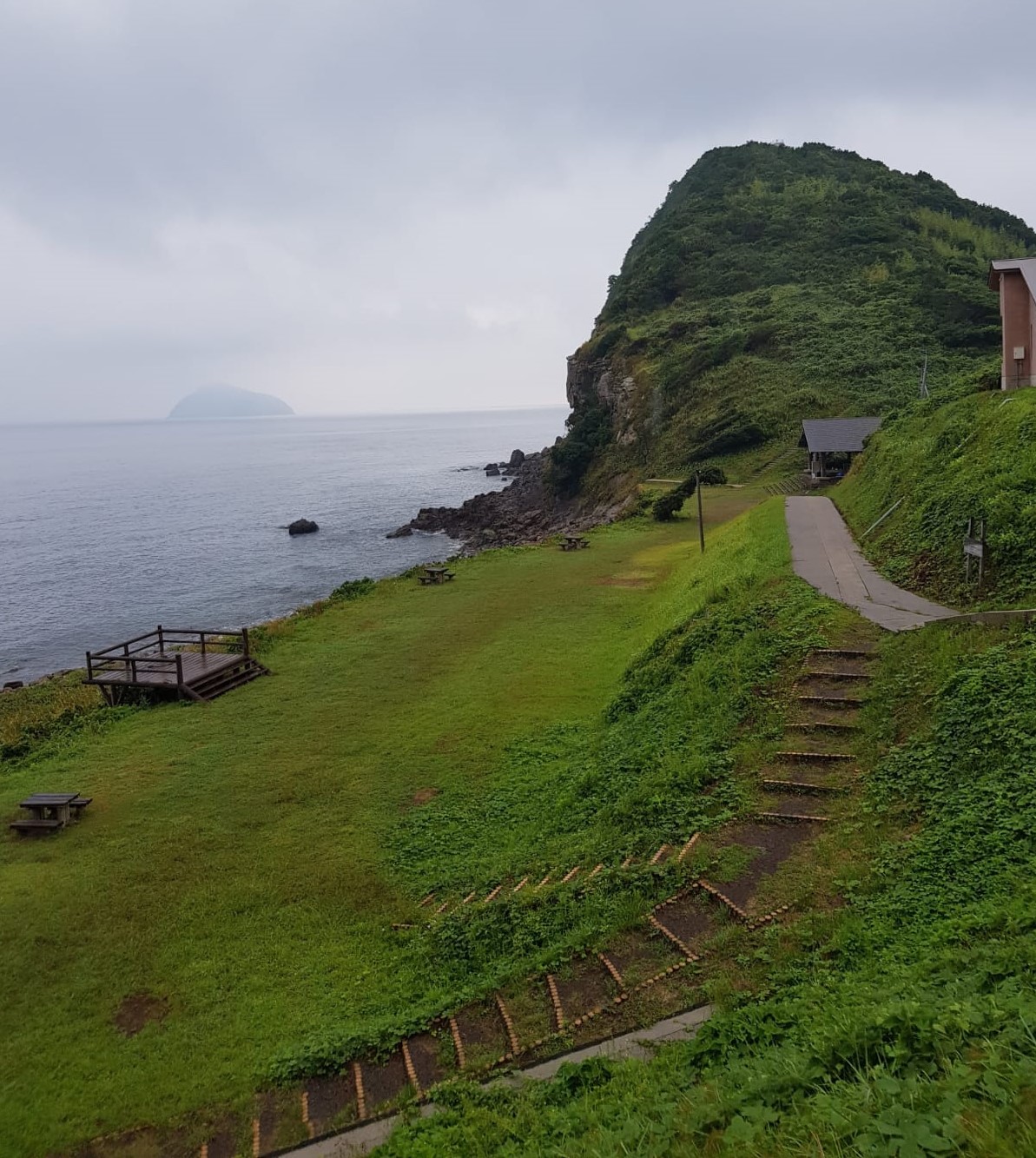 - Attractions/Cultural Sites:
1) Shinto Shrines (10 +) – There are many shrines located across Ama-chō.
The most noteworthy is Oki Shrine, which is dedicated to the late Emperor Go-Toba.
2) Kirogasaki Lighthouse
3) Akiya Coast (Beach and camping grounds)
4) Festivals – Many festivals take place throughout the year, to mark seasonal and historical events and religious rituals. One of the most noteworthy in Ama-chō is the “Kinyamonya Matsuri,” in which 1,000 people gather to perform the islands’ folk songs and dances. It is held every year in August. 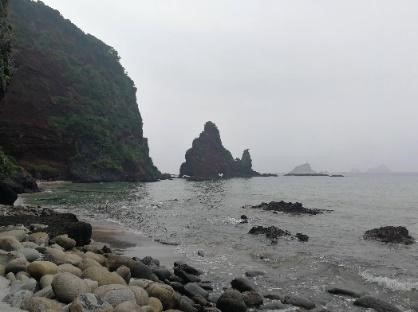 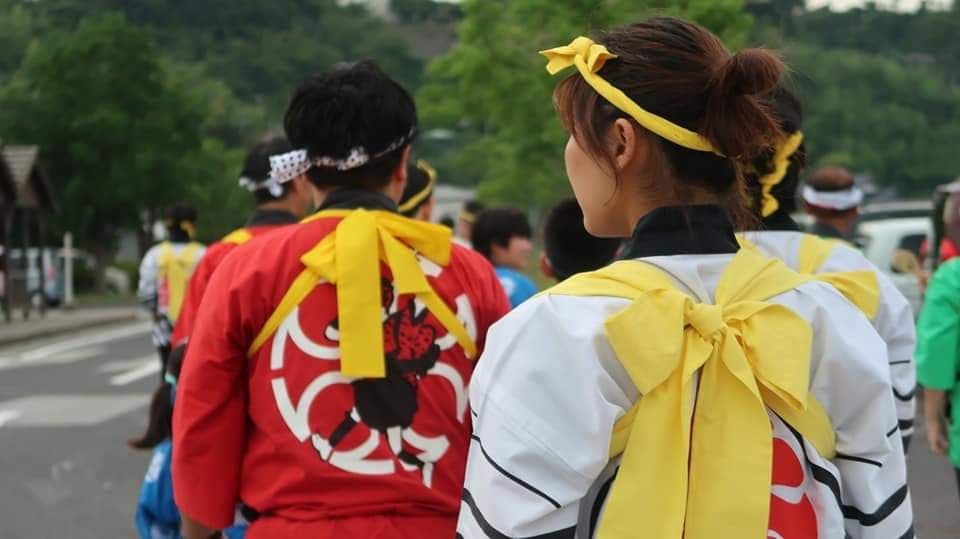