On October 13th, 2018, APIC joined with Japanese company NID and Sophia University along with Sawara town in the city of Katori, Chiba Prefecture to carry out the 4th international ‘Sawara Experience’ project. This time the group was mostly Sophia University students with seventeen students from fourteen countries and nine Japanese students partaking in the event. 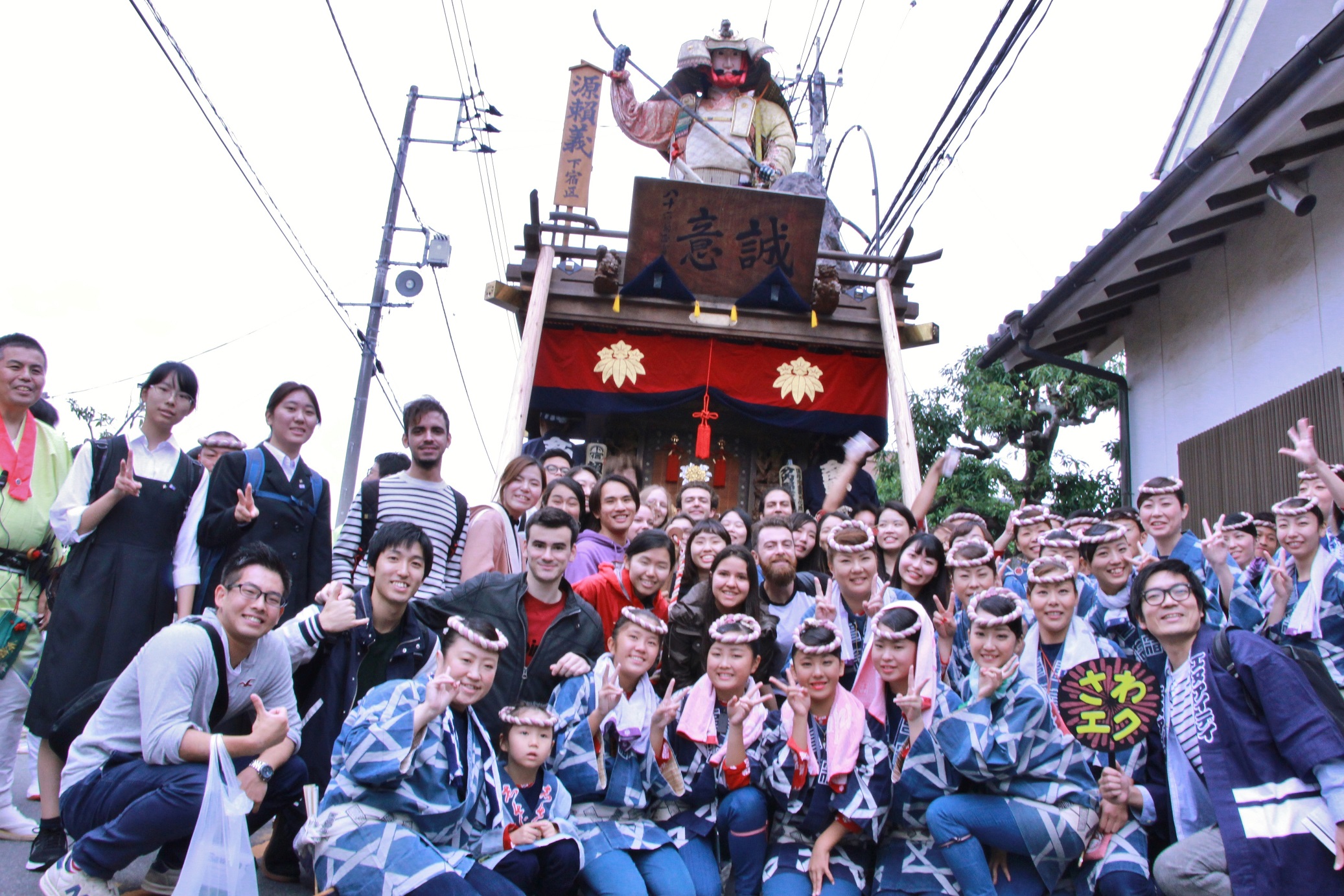 This year’s project was launched with the aim of exposing exchange students to Japanese traditional culture by seeing, experiencing, and interacting with local residents; the Sawara Fall Festival is designated as a UNESCO World Intangible Cultural Heritage. The students had a fun-filled day taking part in Japanese traditional culture, such as watching the floats, talking with Sawara high school students, visiting the historical section of town by boat through the canals, experiencing hand-pulled floats and ‘kushiyaki’. 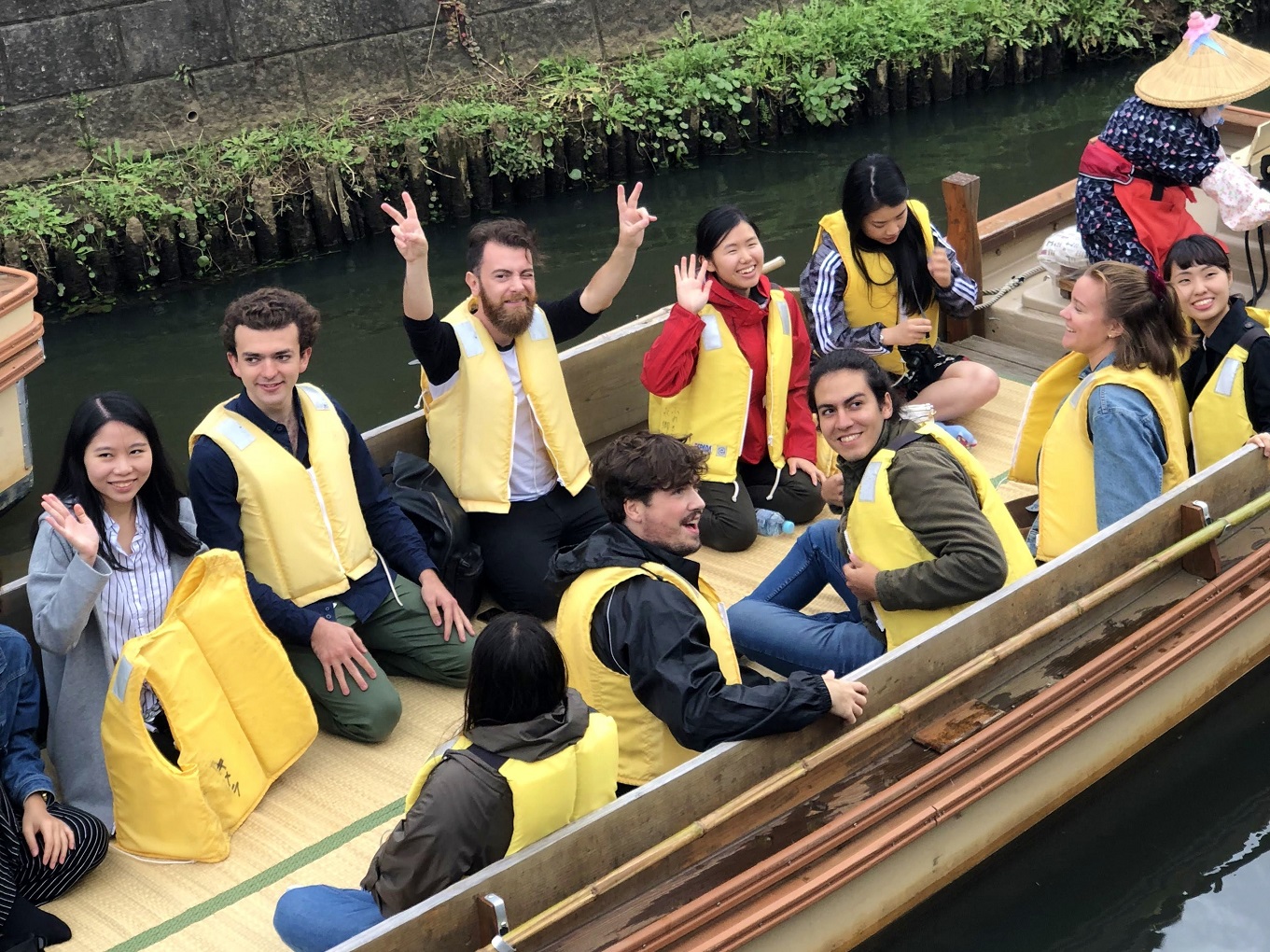 The students were surprised to see that while the town on the day of the festival was bustling with people, there were men and women wearing the traditional festival happi coats, as well as views of majestic floats being pulled down the main street. The students actively asked the Japanese students about their culture when seeing floats with traditional wood carvings, floats decorated with giant historical Japanese dolls and other sights.

In the afternoon the students had the chance to actually pull one of the floats in the festival. At first they were unsure of how to go about pulling the float, but once they put on their happi coats and with the encouragement of locals shouting “wasshoi, wasshoi!” they got it going and had a good time. After dinner the students had a chance to view the flipping of the floats called ‘no no ji mawashi’ and ‘hand dancing’; shouts and cheering could be heard from the group while they partook in the magical-like atmosphere of the Japanese festival.

After the program, the exchange students gave many positive comments such as “it was a great day”; “if possible I’d like to have stayed another day”; and “it was a great opportunity to connect with traditional local Japanese culture”. The organizers of the event and everyone who participated in the tour noted the communication between the exchange students and Japanese students, talking about and comparing their cultures, and were moved by the warm reception of the locals in Sawara.

A video was taken and uploaded of the Sawara Fall Festival:

Below are the thoughts of a participant in this year’s program:

Together with Sophia University and Nippon Information Development Co., Ltd. (NID), the second trip to the Omatsuri Festival of Sawara City, Chiba was hugely a success. Eighteen international students from Sophia university participated in this event, along with staff of APIC, NID and volunteers of Tsuda University. This historical event allowed students to experience a rich taste of Japanese culture and tradition that is desperately seeked in one’s journey to the land of the rising sun.

We arrived to Sawara City midday and started with a bento lunch. During this time, students and volunteers had the chance to come together and get to know more about each other. A time of fellowship, shared among people from all across the world to embark on this wonderful adventure. We were also explained to about the significance of the Omatsuri festival and even the town itself. The grand nostalgia of it all made the excitement in me grow more and more, knowing that I’ll be able to experience the same traditions carried on from 300 years ago.

After the lunch, we then moved on to the streets of the city. The famous, large floats of past warriors and heroes could be spotted from a distance away. These floats were incredibly crafted and stood about 13 ft tall and made almost entirely of wood! Many people filled the city in beautiful, traditional clothing, and a spirit strong enough to bring back the time of olden days. It was especially exciting to watch people, old and young work together to push and pull the heavy floats. Rhythmic drumming, precise coordination and a strong chant of “wasshoi” is what was called to encourage the movement. The excitement was escalated as the whole group of us were able to participate in the action. Locals of the area, and all walks of Japan had welcomed us foreigners warmly. Their encouragement and willingness to let us also help pull the large float was incredibly touching.

After much of the fun, the group and I took a relaxing boat ride down the very same canal that had been used in the past to transport goods. We took advantage of this time to recharge ourselves, and again fellowship with the new friends we were making! Some other activities we were able to partake in was cooking our own Yakitori! A simple and yet satisfying act of grilling our little sticks of chicken to perfection, and finishing it with our topping of choice. A few of us were also able to experience a some specialties of Sawara City, such as their Shoyu flavored ice cream! A delectable flavor that one would hardly think would be so good.

The night was still young, and our bellies were running on empty. We delighted in a wonderful Chinese oriented dinner. Delicious food and good company allowed us all to feel prepared for the evening activities. The great float parade began again as the sun went down on the city. The massive floats appeared with the same greatness as if it were the first time. The magesticeness of the lights, and music had escalated the entire festival to higher level. This time the floats would come to an intersection at the road and spin a few times before moving on. This job is more than just a simple twirl-around. Massive and entirely made of wood, the strongest men of the city work together to lift and push with all their might. I was especially a fan of the many members in the crowd cheering them on as if it was a battle to be beat. This then left perfect, wood dusk circles on the ground, marking it’s accomplishment and moving on. Truly a great sight to see. Before it was time to head back home.

Our trip to Sawara City to attend the festival had provided me with the opportunity to experience something I never imagined I could. The beauty of it all lies in the strength and bond of the community. One another working together maneuvering the floats, the coordination of swift and graceful hand movements of the dancers in the parade and even the happy food vendors ready to serve. The respect for this nostalgic event had many of us, including myself, in pure awe and amazement. Thank you to all who made this special trip possible for us, and I look forward to allowing many other international students experience the same. 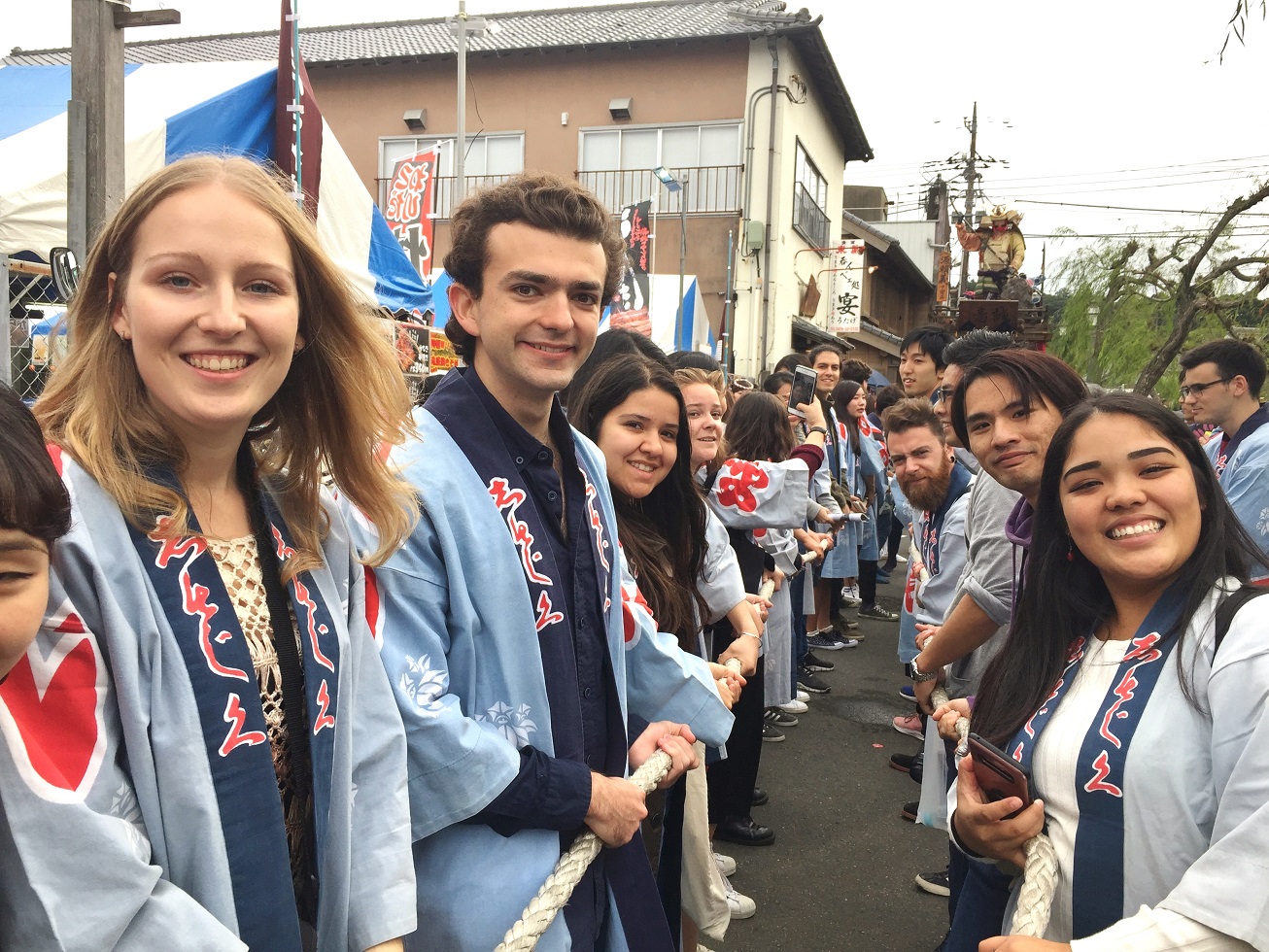