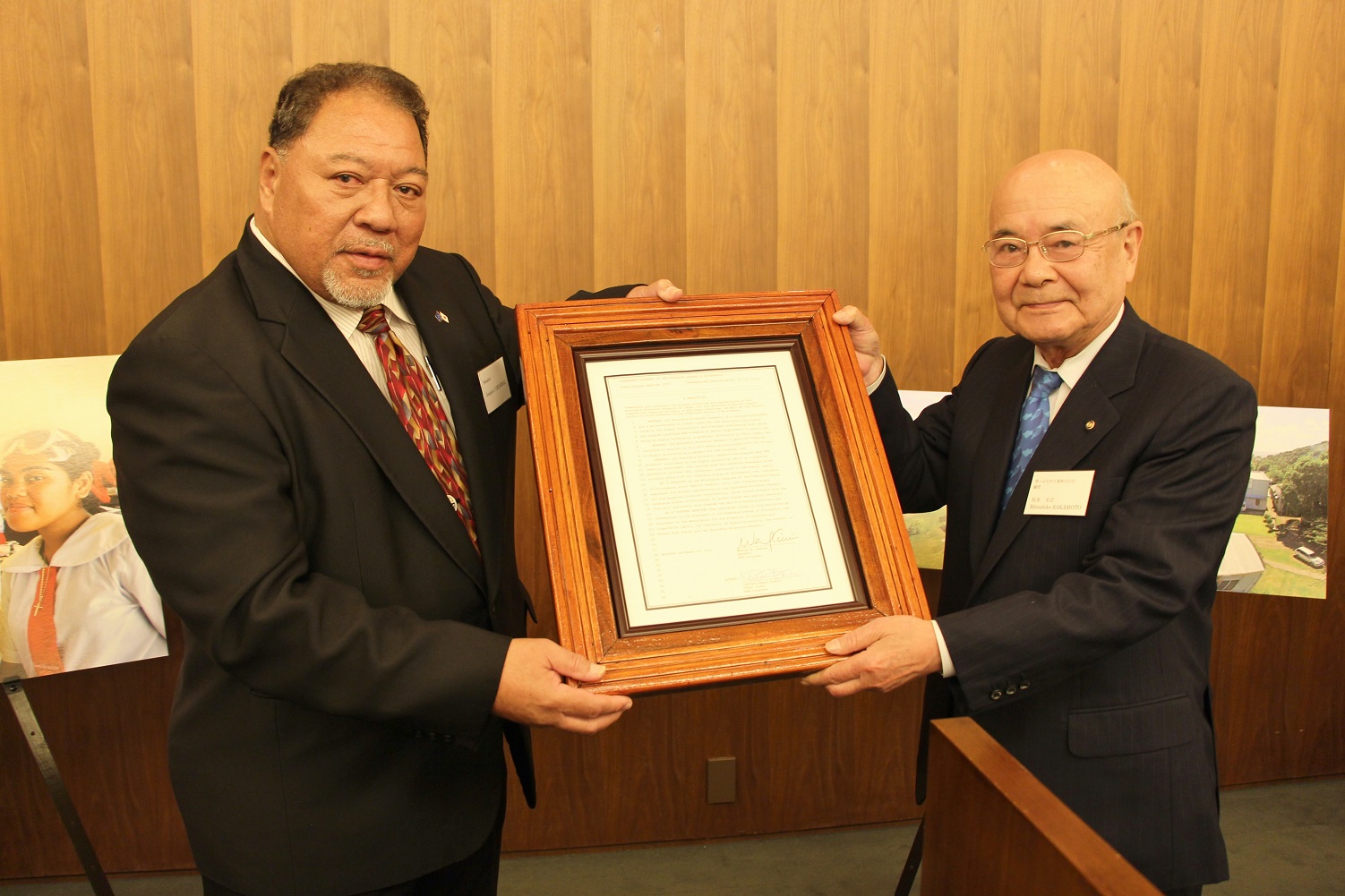 (Mr. Mitsuhiko Sakamoto and Senator Urusemal handing over a declaration of appreciation)

Senator Urusemal of the Federated States of Micronesia was invited to Japan under APIC’s Pacific Leader Invitation Program from November 27th to December 2nd, 2017. During his visit, Senator Urusemal handed Mr. Mitsuhiko Sakamoto a Declaration of Appreciation for Mr. Sakamoto’s generous support of the Xavier High School exchange students.
◆ Time in Tokyo

At Sophia University, Executive Director of APIC Mr. Shoji Sato (also a visiting professor at the University under the faculty of Global Studies) showed the Senator the Yotsuya campus library, and afterward Professor Emeritus Fr. Donal Doyle gave a tour of Sophia’s Kulturheim Chapel. Senator Urusemal said he “ [is] delighted that Xavier High School exchange students are able to study at such a beautiful campus”.

Following the tour of the campus, the Senator met with Mr. Bruce Stronach, the Dean of Temple University, Japan at Showa Women’s University (TUJ will be moving to a new building inside SWU) and talked about having Micronesian students study at TUJ. 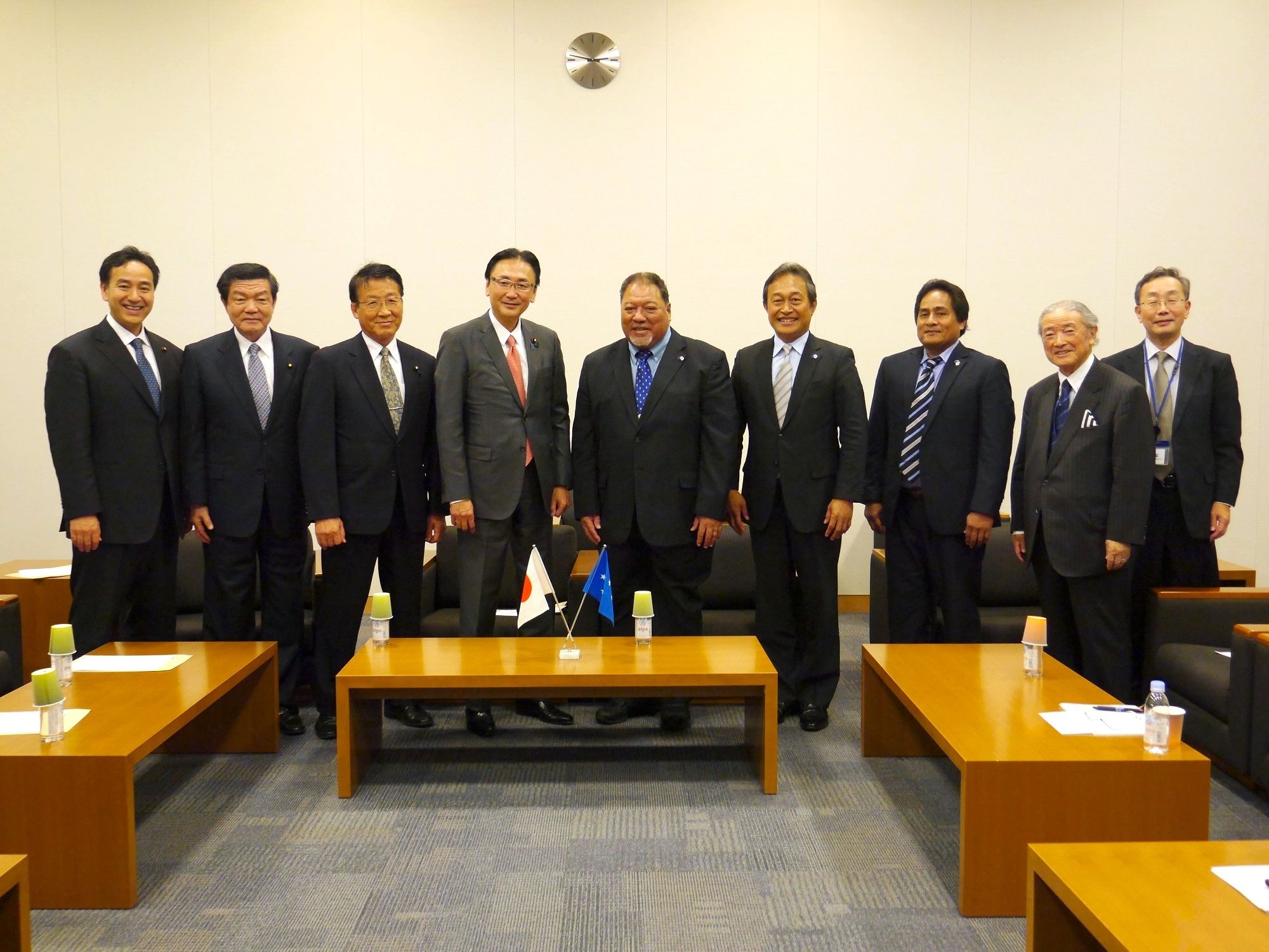 
It was decided in 2016 to give this declaration to Mr. Sakamoto to thank him for his continued generous donations to the Xavier High School scholarship fund. In accordance with Senator Urusemal’s visit to Japan, the official ceremony was held during a dinner party hosted by APIC President Mr. Peter Sato on the evening of November 29th at the Tokyo Club.

During the ceremony the Senator gave a speech of gratitude to Mr. Sakamoto, and at the end of the speech presented him with a wooden-framed Declaration of Appreciation accompanied by a round of applause from the audience. Mr. Sakamoto then gave a short speech of appreciation, and received a bouquet of flowers from Xavier exchange students who started studying at Sophia University the past September. During his speech, Mr. Sakamato gave insight into his generous donations. He stated “At the beginning I donated as a Rotary Club member to the desalination water project in Micronesia, but I came to realize that in order to further the development of the country that education was imperative, and decided to start donating as well to the Xavier High School Exchange Student Scholarship program”. He also stated that “everyone’s support is needed to keep developing the scholarship program”, calling on the audience to support the scholarship fund.

In addition to five Xavier students in attendance, fifteen students from Sophia University and Sophia Junior University who joined in the Micronesia Exposure Tour in September were also present. At the end of the ceremony the Sophia students went and thanked the Senator for introducing them one-by-one at the start of a congressional session when they visited Micronesia.

After the end of the evening the Chancellor of Sophia University’s Graduate School, Fr. Toshiaki Koso gave the following statement “I am very excited to announce that next September the first student from Xavier will be admitted to Sophia University’s Graduate School. I want to express my deepest gratitude to Mr. Sakamoto for his support” thanking Mr. Sakamoto and bringing a warm close to the evening. 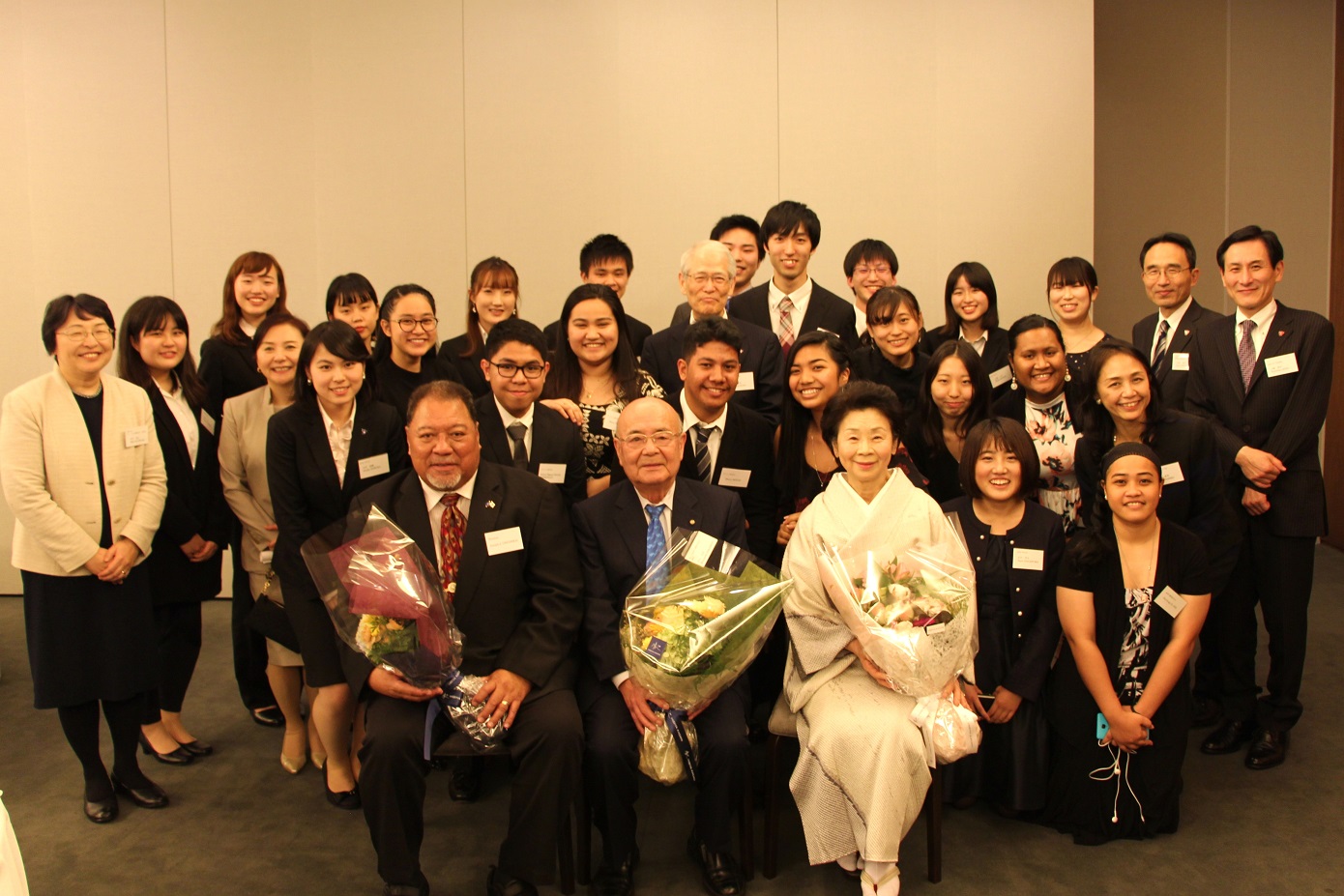 (Mr. Sakamoto at the Declaration of Appreciation ceremony with Sophia University students and Xavier exchange students)

◆Time outside of Tokyo


The latter half of Senator Urusemal’s visit to Japan was spent with Professor Kataoka, PhD, who is in charge of the Nan Madol Ruins research project. They visited Kinkakuji Temple in Kyoto and the National Museum of Ethnology in Osaka.

At the National Museum of Ethnology, the canoe Micronesia used to travel from Satawal Island in the State of Yap to Okinawa to participate in the World Expo ’75 named ‘ Chechemeni’ was on display. Senator Urusemal’s wife is a native of Sawatal Island, and was delighted to see the relic on display. He was also very moved with nostalgia after watching the video documenting the voyage across the ocean.

The Senator said that his trip to Japan this time was “a very meaningful trip filled with wonderful plans. I am very happy to be so warmly received by everyone”. Senator Urusemal’s official visit to Japan contributed to the improvement of Japan-FSM ties.

Additionally, the Senator reported in detail about his official visit to the FSM Congress on December 7th. 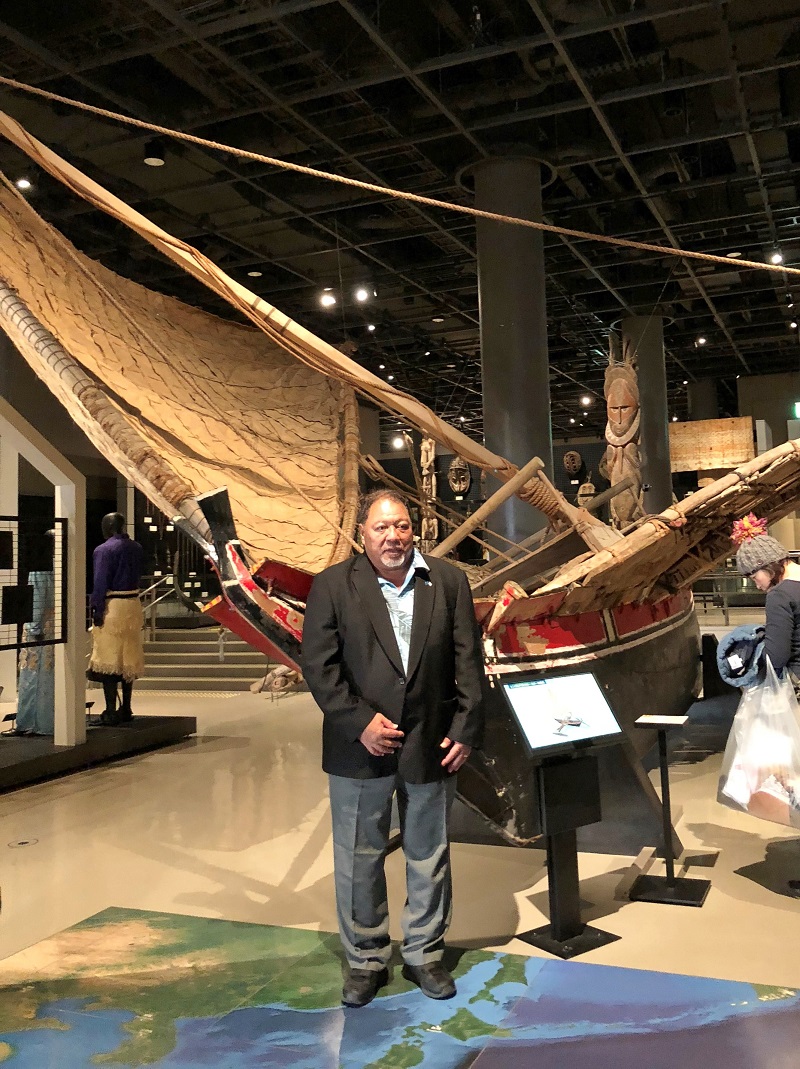