I started my diplomatic post in Solomon Islands in April 2018, and returned to Japan at the end of May 2020. Since entering the Ministry of Foreign Affairs in 1978, I had spent 80% of my 42 years of service specializing in Chinese relations; however, I was assigned to Solomon Islands for the last two years and two months of service. The break in diplomatic ties between Taiwan and Solomon Islands and the subsequent establishment of diplomatic ties with China was a closely watched topic of interest during my time as Ambassador. I will touch on the background of this “switch of diplomatic relations” and discuss the current situation of Japan-Solomon ties in the paragraphs below.

1. A (previously) Healthy Relationship with Taiwan

Solomon Islands gained independence from the UK in 1978 and established diplomatic relations with the Republic of China (Taiwan) in 1983. According to press articles on the subject, Solomon Islands had originally planned to establish ties with the People’s Republic of China, but immediately before establishment they switched to Taiwan. One theory claims that at the time, China would offer USD 10,000 when diplomatic ties were officially established, but to donate part of its precious foreign currency holdings was the best offer it could do at that time. Anyhow, for the next 36 years Solomon Islands maintained diplomatic relations with Taiwan.

The relationship between Solomon Islands and Taiwan was consistently a quiet, but stable one. In the political field, Solomon Islands had a budget to support the development and other activities of parliament members’ constituency called the Constituency Development Fund, and over 20% of the funds were provided by Taiwan. There were numerous cases of these funds being used inappropriately and were known as breeding grounds of corruption, but the truth remains that these funds helped keep the Taiwan-Solomon relationship. Additionally, Taiwan continually provided farming (vegetable) production support through agriculture projects, provided aid for medical staff at the national hospital, Chinese language classes at university, accepting exchange students from Solomon Islands and other activities which were picked up by local media, creating a sense of familiarity between Taiwan and Solomon Islands. Both nations advocated for democracy and often stressed the fact that both were island nations.

This change was picked up not only by Japanese media, but Europe and America as well. Their interpretation, that by closing in on Taiwan’s diplomatic field China had furthered its mid-to-long term strategy to secure its place in the international community, is not incorrect; however, there is more to the story than what meets the eye.

On the other hand, there are around 3,000 to 4,000 mainland Chinese living in Solomon Islands, substantially supporting the islands’ economy with shops and business in city centers. China has also been the largest trading partner with Solomon Islands; approximately 70% of goods exported from Solomon Islands are bound for China. Majority of exports are lumber, marine products such as sea cucumber; however, Solomon Islands has not been able to procure added value to these processed items, and price formation is controlled by the buyer. Considering the closeness of both nations’ economic relationship, it is not a stretch to say that the establishment of diplomatic ties was only natural.

Secondly, the United States might have put more pressure than necessary on Solomon Islands so that the latter would maintain ties with Taiwan. During WWII Solomon Islands was part of the Allied Forces, siding with the United State to fight against Japan; however, after the war American presence in the country was limited, and in recent years the US has rapidly approached Solomon Islands in order to try and curb China’s developing presence in the Pacific region. Solomon Islands is a small and least developed country, but seems to have unusually lots of pride as a nation. Up until recently the US’s presence was nothing but lacking in the nation; however, a sudden flash of large-scale aid to the nation from the US has local politicians saying they feel they are being played like a piece in the US’s bid to maintain Taiwan’s presence in the island country.

3. China Getting Serious in Solomon Islands

China had originally planned to officially send its ambassador to Solomon Islands in February to start off its diplomatic activities in the nation, but the COVID-19 pandemic has put these plans on hold. However, China has already pledged large-scale grant aid for buildings to be constructed for the 2023 Pacific Games, water works projects in the capital city of Honiara, and other projects. It has also given a significant amount of emergency aid to help combat COVID-19. Regarding the private sector, there is already a large presence of mainland Chinese businesses in Solomon Islands, and investments in the sector will grow at a rapid rate in the future coupled with government support.

On the other hand, there are also voices in Solomon Islands that are strongly apprehensive of China’s growing presence in the nation. There seem to be multiple reasons contributing to the concern, one of them being that China’s authoritarian rule does not align with Solomon Islands’ basic values of democracy and freedom of speech. Over 95% of the population in Solomon Islands is Christian, but within mainland China freedom of religion, including Christianity, is not guaranteed, damaging China’s reputation. Additionally, China takes a strong-handed method to its self-serving behavior overseas, and there are voices of concern in Solomon Islands that the nation will one day fall to the grips of China and become a dependent nation under the superpower.

Another more direct impact on the island nation is, naturally, the wide-spread economic changes. As previously mentioned, regarding government-based aid, China has started its support with funding for the Pacific Games, which is not only extensive in amount, but also covers multiple fields. Exceeding this aid is predicted to be investments on the civil level. Solomon Islands does not have many attractive investment proposals, and in many cases land-related problems are the reason why development proposals do not go through to the end. However, there is a high probability that various small and large Chinese companies spread out over a range of different fields will come through with investment proposals in areas such as commerce, resource development, agriculture, tourism, etc. In this case, not only the facilities and equipment, but also if the employed workers are Chinese, there is a possibility that the citizens of Solomon Islands will start to oppose Chinese development which will not lead to their benefits in their land. Furthermore, some say that for the Chinese diaspora that has already been living in Solomon Islands, official diplomatic ties with China will loosen visa and remittance restrictions, and business aid and protection will be easier to come by; however, many of the these residents have gone through trials and tribulations living and doing business in Solomon Islands, and the emergence of the “new diaspora” and new investments from mainland China will only escalate and intensify competition between Chinese-owned businesses on the islands.

As the reader may be aware of, in recent years Chinese presence in all corners of the world has become overwhelmingly large, and the establishment of diplomatic ties between China and Solomon Islands will strengthen official and civil ties. In the past 40 years, Japanese ODA (overseas development assistance) has been highly received by Solomon Islands, making Japan a trusted partner. Under this new Chinese presence in the island nation, what actions Japan will take going forward will be a difficult challenge. 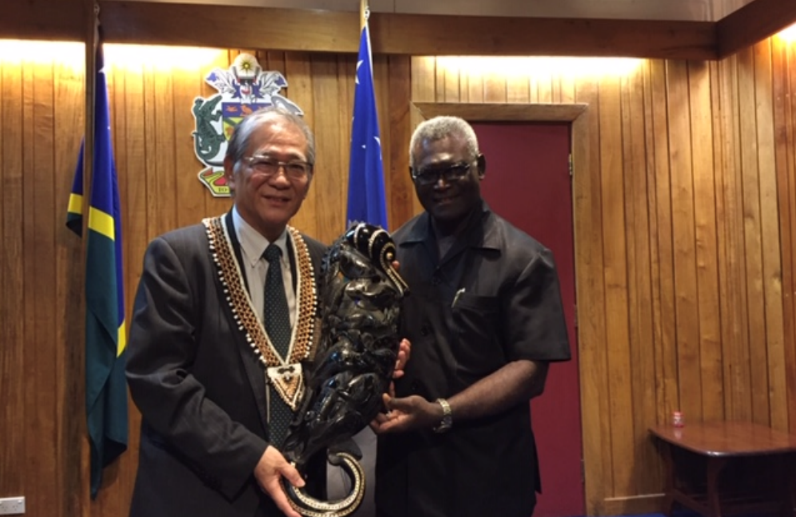 The start in relations between Japan and Solomon Islands was the Battle of Guadalcanal in the beginning of WWII. Approximately 20,000 Japanese soldiers were sent to fight this campaign on the island, but the majority of soldiers fell victim to the battle, and to this day their remains are still being discovered, along with visits from memorial groups from Japan. 75 years have passed since the end of WWII, and accordingly the operation and maintenance of these activities is become increasingly more difficult as time goes on. Regarding battle sites and war memorials, Solomon Islands’ policy is to maintain these sites as historical heritage sites, as well as for tourism resources; Japan also has a duty to set up public and private funds etc. to help with maintenance costs.

Regarding the size of aid from major donors to Solomon Islands, Australia gives a little less than USD20 billion on a yearly basis; in comparison Japan’s aid is only one-tenth of Australia’s, yet it is very highly received by Solomon Island. The pillar of Japan’s ODA is grant aid, and looking back on the last ten years projects such as the Honiara port, markets, airport, Kukum highway and other important infrastructure projects have been the recipients of Japanese ODA. They have received positive responses from the islands because Japan has cooperated on both public and private projects which the country most wanted. Additionally, at the time of writing around 30 overseas volunteers are living in regional areas under difficult conditions, fulfilling a large role of deepening mutual understanding on a grassroots level.

There are many other areas in which aid from foreign countries will also be necessary in the coming times; in particular environmental conservation policies centered around plastic bottle and auto scrap disposal are in immediate need of formation. 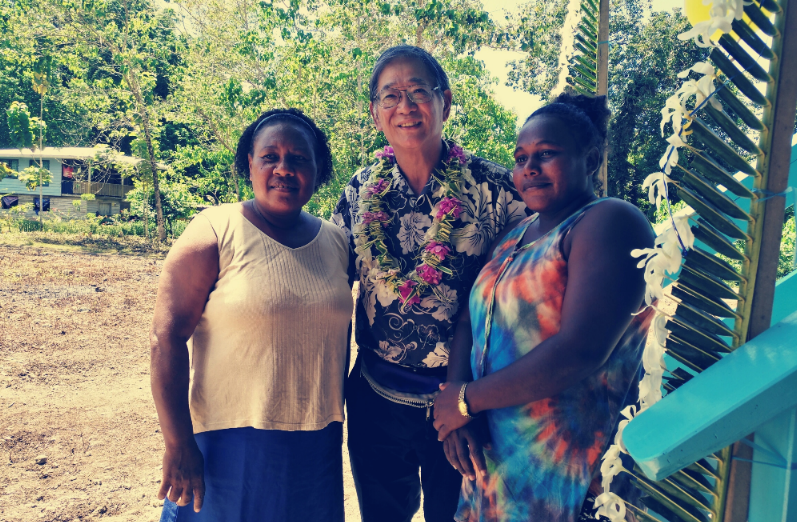 (Photo 2: At the grant aid proposal ceremony from grassroots movement)

Solomon Islands’ fisheries and maritime sector is one of the main partners from the Japanese perspective. Looking back into the past, from the late 1960’s Japan fished yellow fin tuna and bonito in Solomon waters, and presently it is still an important fishing region alongside Papua New Guinea. It goes without saying that Japan is a longtime fishing superpower, and Japan hopes to share its various experiences and knowledge with Solomon Islands and increase its cooperation in the fisheries sector.

Japan should maintain and continue its communication and cooperation stance in the above-mentioned points, and should also look to expand areas where cooperation can be expanded even further. In particular, one area that I believe to be of importance is investment in the private sector. In the above-mentioned fisheries sector, in the beginning of the 1970s Japan set up a tuna canning factory in Solomon Islands, playing a large part in improving the quality of diet, employment, and acquisition of foreign currency. It would be wonderful if in the future another such investment will have such an impact on the Solomon people. Another area of expansion is in the cultural and human communications sector. It must be said that Solomon Islands’ cultural education facilities and communications infrastructure are lacking; by providing aid not only for infrastructure in this area, but also if Japan does not plan to strengthen its relationship on a grassroots level through pop culture such as anime, the spread of Japanese language, and exchange student programs, then it cannot be denied that future Japanese-Solomon relations will weaken. It goes without saying that the effort of all related individuals on a wide range is essential.